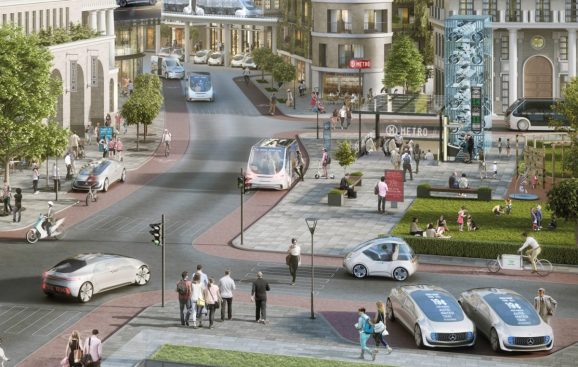 In a 2015 interview, Elon Musk pointed out that recent advances in auto technology could lead to human-operated vehicles becoming illegal someday. While this may seem ludicrous to some, it could play out sooner than you think. By 2025 — just a few short years away — the auto industry’s autonomous segment is projected to reach a worth of $26 billion, according to insights from Bain & Company. Some estimates even project as many as 10 million self-driving cars will be on the road by 2020.

Musk’s prediction that human-controlled vehicles could be outlawed comes from not only an increase in autonomous options, but also for one simple reason: safety. It’s hard to imagine tech operation being safer than human operation, but vehicle safety statistics point to driver error as one of the top causes of auto accidents. In fact, more than 3,000 people were killed and 431,000 injured from distracted driving in 2014 alone, with contributing factors including cell phone usage, fatigue, aggressive driving, and running red lights. Although it’s far too early for statistical comparison, it’s fair to say that autonomous vehicles will face far fewer variables and will have greater predictability in certain driving situations.

Unfortunately, we haven’t quite maximized safety protocols on autonomous cars just yet. For example, Uber recently experienced some roadblocks when testing for autonomous vehicle risks, with a higher than expected human takeover rate required and patterns of hard decelerations and abrupt jerks still in play. However, once autonomous vehicles do receive a gold star for safety standards, it will have a massive impact on the automotive industry. And auto won’t be the only industry disrupted by autonomous vehicles. Law enforcement, retail, and hospitality will all experience a shift in how they do business — but none more so than the insurance industry.

Without driver error, will we need insurance at all?

In theory, removing human error from the roads means fewer accidents — which would also remove the need for private insurance that covers damage caused by drivers. In tandem, these two changes would lower accident liabilities and, theoretically, cause a huge drop in personal auto insurance premiums.

As it stands, auto insurers offer rates based on individual driving histories, and can even optimize each policy’s pricing via driver-approved telematics. As the insurance industry adapts to new technology saturating the market — turning drivers into mere passengers — the liability for accidents caused by autonomous vehicles could be handed off to the manufacturer, software designer, or even the government through the Department of Transportation. “At least the current thinking is that the manufacturers will be ultimately responsible for a lot of these future accidents when an automated vehicle is involved,” said Rick Gorvett of the Casualty Actuarial Society.

But the Insurance Information Institute’s Michael Barry doesn’t think these changes will wipe out owner responsibility in total. Barry pointed out that driver error isn’t the only danger to vehicles, and owners and insurance companies will still have to factor in off-road damages that may occur. “Cars can still get flooded, damaged, or stolen,” he said, “but this technology will have a dramatic impact on underwriting. A lot of traditional underwriting criteria will be upended.”

If something happens, who’s going to fix all this stuff?

This focus on off-road damages would logically lead to an increased emphasis on service contracts that cover exterior and technological maintenance. And with the advanced technology needed to make fully autonomous cars a reality, auto maintenance technicians will quickly become IT gurus, rather than just repair mechanics. So, those owners who take on at-home repairs may begin to think twice — tackling these jobs will require new and complicated diagnostic tools to identify and repair integrated technological failures.

While tech repairs will prove vital to the capability and safety of AI-backed vehicles, autonomous vehicles will also require an increase in general maintenance, like alignments and tire changes, in order to remain fully viable. Something as simple as a vehicle’s alignment being off could easily affect autonomous steering adjustment calculations, and ultimately create a safety hazard for passengers. This, in theory, could shift responsibility back to the driver.

These and many other scenarios will need to be considered when adjusting insurance policies for new technology.

“Obviously, it’s not going to be up to the property and casualty insurance industry to determine when driverless cars take to the road, how they operate, and what kinds of technology they use,” explained Michael Macauley, CEO of Quadrant Information Services. “It is, however, going to be up to insurance carriers to understand the situation and evaluate the risks posed by different operators — if that’s even the right word — in different cars on different roads and in different weather, using a variety of technologies.”