Eldim, based near the Normandy town of Caen, has been making various types of display technology for more than 30 years. More recently, this has evolved into making components that allow for “optical analysis of angular characteristics.” Apparently, a version of this technology is one of the critical components being used in the new Face ID system for the iPhone X.

Local reporters were invited to tag along for the visit, which they documented on Twitter and blog posts. A reporter for Ouest-France noted that executives said the two companies had actually been working together for almost a decade, mostly in an R&D capacity. It was only with the release of the iPhone X that the facial recognition system is being baked into a product, however.

Eldim CEO Thierry Leroux told reporters that working with Apple was “an incredible adventure,” but added that there have also been huge technical challenges over the years. “For us, it was a little like sending someone to the moon,” Leroux told reporters. Cook responded, “It’s great what you have done for us.”

The visit was no doubt a thrill for Eldim’s 42 employees. It was also likely a diplomatic move by Cook, who is scheduled to meet with Macron at 4:15 p.m. CET today. The official agenda for their meeting has not been disclosed, but it’s likely to cover the question of Apple’s tax payments in France, and in Europe in general.

While Macron has cultivated a pro-tech and pro-entrepreneur reputation, he also has been fiercely critical of American tech companies not paying sufficient taxes. Apple is facing a demand to pay $15 billion in taxes to Ireland following a European Union investigation that found the company’s tax structure there violated EU competition rules.

Macron is among the European leaders pressing the EU to develop a new taxation scheme for tech giants that would make it more difficult for them to duck taxes by creating elaborate systems of corporate shell companies.

Cook and other leaders have been eager to highlight the positive economic impact their companies provide in terms of job creation across Europe. The visit to Eldim serves as just one such example. 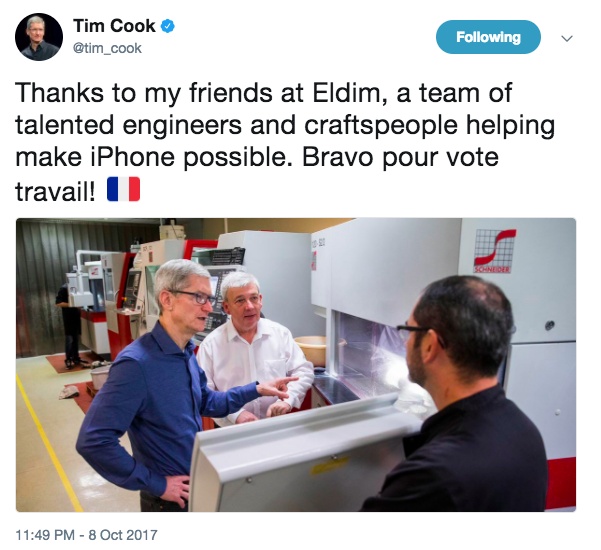 It should read: “Bravo pour votre travail!” He deleted that one and posted a corrected version:

The French are pretty hardcore about this language stuff.