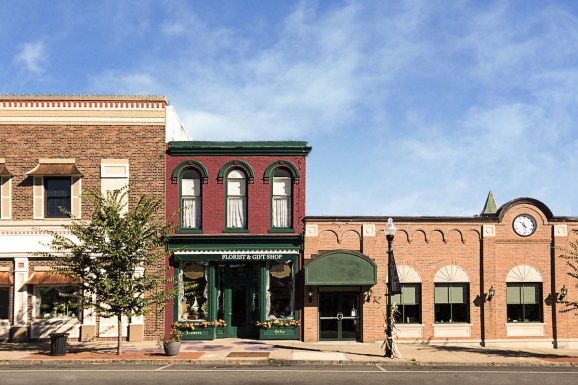 There was a specific type of neighborhood I always envisioned my kids growing up in. There would be tree-lined streets. I would walk or ride my bike to stores and restaurants. My children would be part of a mob of kids wandering through the neighborhood. I would know those kids too, and they would think of our home as their home — and though I would complain about it, I really wouldn’t have it any other way.

Almost five years ago my family and I moved to St. Charles, Missouri, which is part of the St. Louis metropolitan area. In Phoenix, where we moved from, buying a home in a tree-lined neighborhood would have set us back at least $500,000 — and it isn’t like Phoenix is known for a high cost of living. I just looked on Zillow, and in San Jose $200,000 might get you a mobile home. In San Francisco, as of this writing, there is a single 1400 square foot lot available for that price.

In St. Charles, less than $200,000 got me 3500 square feet, in the community-oriented neighborhood I always envisioned.

In Omaha, even in a recovered real estate market, less than $200,000 can still get you a three-bedroom home. That’s also true in Kansas City, Salt Lake City, Indianapolis, and several other cities with thriving startup scenes.

This low cost of living in cities across the middle of America plays an important role in creating entrepreneurs — and more importantly, entrepreneurs who don’t fit the mold of the stereotypical young, male tech founder.

I know from personal experience.

About a year after I moved to Missouri, I started writing blog posts on LinkedIn, primarily for fun — which is, I acknowledge, a strange statement. Shortly after I started writing, companies began to contact me about working as a content consultant. After talking with my wife, we decided to take a chance, and I started my own public relations and marketing strategy company.

When I made that decision, I took an immediate and substantial pay cut. I could never have done that and still paid the bills if we lived in Phoenix. If we lived in San Francisco or San Jose, we couldn’t have taken a pay cut either, because to begin with, we would have been living in a literal shoebox and testing the theory of whether a diet that consists solely of Top Ramen and bananas stunts a child’s growth.

The low cost of living here in the heartland affords entrepreneurs the chance to take a risk. While the stereotype of the entrepreneur is a college student living with 17 other college students, the reality is much different. According to research conducted by the Kansas City-based Kauffman Foundation, the average age of the founder of a startup with $1 million or more in revenue is 39.

The average 39-year-old has responsibilities that still need to be met, even if they decide to become an entrepreneur. Meeting those responsibilities is a lot more feasible when you’re paying a mortgage somewhere that has a reasonable cost of living. I know for cities and communities, affordability and cost of living aren’t the sexiest selling points, but they are an important part of creating a community where entrepreneurship thrives.

A low cost of living made my entrepreneurial dreams possible.

And judging by the growth of startups across the heartland, a low cost of living is making entrepreneurship possible for a lot of other founders, too.

Dustin McKissen is the CEO of McKissen + Company, a marketing and management consultancy located in St. Charles, Missouri.