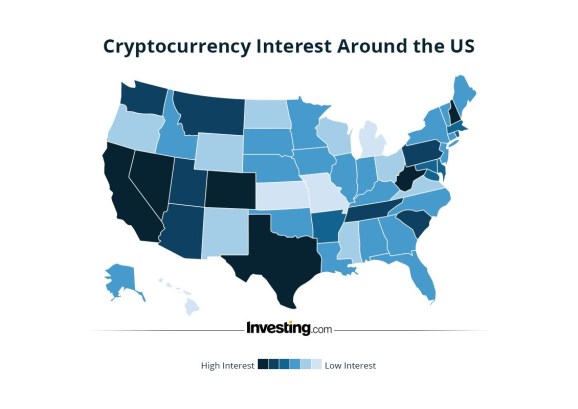 With cryptocurrencies continuing to gain traction as an increasingly popular investment vehicle globally, my team at Investing.com wanted to gauge how interested U.S. investors are in these currencies at the moment.

Looking at our data for 2017 (January – September), we put together the above infographic. What it shows is that cryptocurrency interest across the U.S. is driven by differing virtual currency regulations within each state.

Interestingly enough, topping the list of states interested in digital currencies are Nevada, Texas, and New Hampshire. And perhaps this can be explained:

California and Colorado round out the top five most interested U.S. states, at fourth and fifth place respectively.

Let’s take a look at the bottom of the list — the states voicing the least interest in cryptocurrencies. In this part of the list, too, legislation seems to play a key role:

This data shows an important correlation between regulatory measures on cryptocurrencies and the interest or popularity of those currencies in different states. We often like to think of these currencies as a medium to escape state regulation, but it is clear that each state still has the means either advance or delay and hamper the adoption of the new currencies.

These legislative positions are likely to have the biggest impact on whether currencies like bitcoin go fully mainstream or remain rarely used niche assets.

Clement Thibault is a Senior Analyst at Investing.com.