The San Mateo, California-based startup provides citrus-colored bikes that can be parked and picked up from anywhere, eliminating the need for docking stations. Riders use the LimeBike mobile app — available on both iOS and Android — to locate the vehicle and unlock it by either scanning the QR code or inputting a unique bike license plate number. 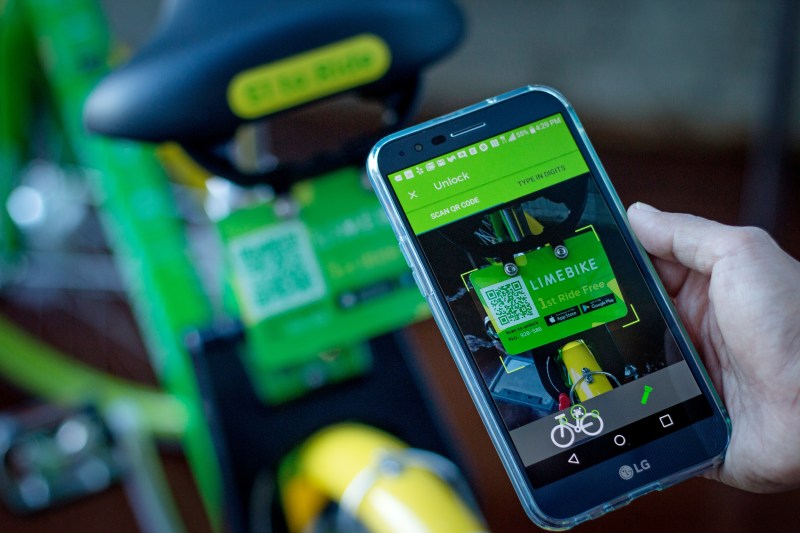 Above: LimeBike app and QR code

The bikes are manufactured by Battle FSD, which also produces high-performance bikes like Specialized and Trek. “They are the largest bike manufacturer that supply about one-third of the U.S. annual bike shipment,” wrote LimeBike cofounder and CEO Toby Sun, in an email to VentureBeat.

LimeBike rides cost one dollar for 30 minutes, or fifty cents for students. Since launching in March, the startup claims to have logged over half a million trips and counts 250,000 registered users. According to Sun, there are currently 10,000 bikes circulating in 12 cities and on eight university campuses across the U.S.

The startup recently announced a new initiative called the Lime Business Network, through which businesses can offer LimeBike to employees as a perk. Partners include WeWork, Genentech, New Tech Northwest, Galvanize, and EnergySavvy.

While partnerships, funding, and expansion all sound very alluring, can LimeBike riders really leave their bikes anywhere? “Riders can leave bikes at any designated areas on sidewalks and nearby bike racks, not blocking pedestrian right-of-way,” wrote Sun.

The chief executive added that the startup works closely with local governments, bike advocacy organizations, and key community organizations to promote rider safety and parking education before, during, and after deployment.

“We also have a robust local ops team that ensures bikes are properly parked,” wrote Sun.

Competitors in the space include Velos and Next Bike in Europe, Mobike and Bluegogo in Asia, and Spin and Cycle Hop in the U.S.

Today’s fresh injection of capital will be used to expand operations, support ongoing upgrades to the bike design and the mobile app, and increase the size of the current deployed fleet by 10 times by the end of the year, according to Sun. “We are in discussions with major metropolitan cities, both in the U.S. and beyond, including Europe, though our focus is on the U.S. right now,” he wrote.

To date, LimeBike has raised a total of $62 million, and it currently has more than 50 employees.