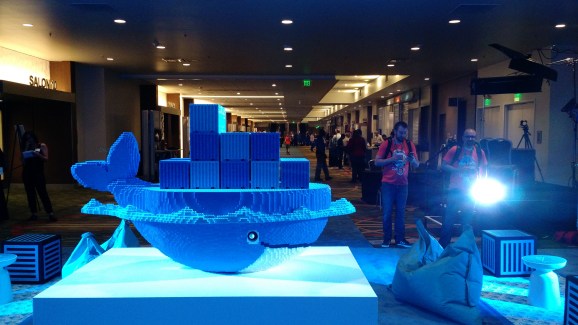 At Docker's 2015 DockerCon conference in San Francisco in June.

Docker announced today that customers of its Enterprise Edition software for containerized application management will now be able to deploy their apps using Kubernetes.

Businesses using Docker EE will be able to take their pick of container orchestration software, running applications using Docker’s Swarm orchestrator alongside Kubernetes-managed apps on the same compute cluster. Docker Enterprise Edition will provide the same security and administration capabilities for containers managed by both systems.

That’s the power of this announcement: Organizations will be able to adopt Kubernetes, which is incredibly popular (particularly among developers), while retaining the management features they rely on with Docker, like security scanning of container images. The system will be compatible with Linux and Windows, along with the wide variety of Docker-certified container images.

David Messina, Docker’s chief marketing officer, said in an email that the company will be shipping the most recent stable open source release of Kubernetes with its Enterprise Edition software and keeping that up to date.

Developers will also be able to work on Kubernetes applications on their personal hardware. Docker for Mac and Windows will also support that container orchestration software for local development using the same tools that power developers’ Swarm-based workflows.

This makes Docker yet another in a very long line of technology giants embracing the open source container orchestration software, which began its life at Google. Kubernetes has been taking over the world of containerized applications, and this announcement serves as yet another sign of its accelerating popularity.

Mesosphere, for example, recently announced that its DC/OS software will manage containerized applications using both the company’s Marathon orchestration software and Kubernetes.

Swarm continues to be an important part of Docker’s work, too. Messina said that it’s a “critical” part of the Docker Enterprise Edition architecture.