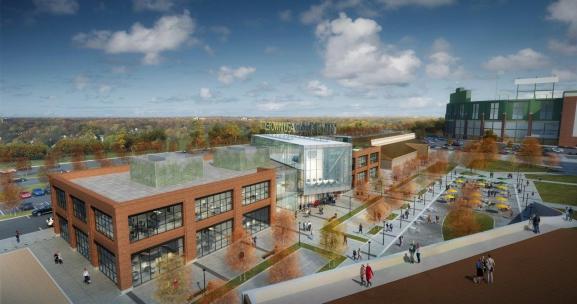 A rendering of the Microsoft-supported Titletown Building, scheduled to open next fall.

Today, Microsoft and the Green Bay Packers football team announced that each organization will be investing $5 million, doled out over the course of the next five years, to fund the creation of an accelerator, an early-stage VC fund, and a business development lab in Green Bay, Wisconsin.

The building, called Titletown Tech, is tentatively scheduled to open next fall, and will be housed in Titletown District, an approximately 45-acre business and recreational development west of Lambeau Field that’s largely been funded by the Green Bay Packers.

“We want to ensure that the great talent in the Fox River Valley has the same economic opportunities that are found in large cities across the country,” Microsoft president Brad Smith told VentureBeat via email. “By combining the Green Bay Packers’ deep community engagement with Microsoft’s technology expertise, TitletownTech represents a one-of-a kind partnership.”

Smith also tells VentureBeat via email that Microsoft will hire a manager for each TechSpark community, who “will partner with local leaders to learn more about regional challenges and determine how technology can help address them to help businesses digitally transform, create jobs, and grow the economy.”

The state of Wisconsin as a whole has struggled to attract and retain startup founders — the state ranked last in the Kauffman Foundation’s annual state-by-state index of startup activity. And Green Bay, the third largest city in Wisconsin, has traditionally been overlooked by Wisconsin startup founders and investors in favor of Madison and Milwaukee. The city does offer the advantage of hosting a number of manufacturings, logistics, and consumer goods companies companies. Procter & Gamble and Georgia-Pacific both have manufacturing plants for paper products in Green Bay.

Mark Hackl, founder of transportation startup Lanehub, worked as an executive for 20 years at various Green Bay companies before launching, including Schreiber Foods, a dairy company with its headquarters in Northeastern Wisconsin. Today, his startup — which helps connect large companies with one another via a subscription service to ship their products more efficiently — counts Procter & Gamble, Anheuser-Busch InBev, and Nestle among its customers. He told VentureBeat, however, that it’s “hard for young entrepreneurs here to make those connections sometimes.”

Andrew Verboncouer, the president of Digital Fertilizer, a five-year-old organization that aims to “strengthen the high-growth startup community of Northeast Wisconsin,” told VentureBeat in a phone interview that while the startup community in the area has become more connected over the past several years with an uptick in conferences and networking events, there is a need for more physical spaces in the area where “a first time entrepreneur that’s never done this before … can get the resources they need.”

To that end, the added presence of Microsoft then could be an important foot in the door of Silicon Valley for young entrepreneurs. Microsoft’s press release states that employees from Microsoft will serve as mentors and advisors at Titletown Tech.

However, it will take more than the injection of $10 million to help Wisconsin startups compete with Silicon Valley startups, or even those from other states in the Midwest. Startups in the state of Wisconsin only received $240 million in VC funding in 2016, according to the NVCA. The press release does note that there is an opportunity for additional investors to add to the venture capital fund, so presumably that investment will grow.

The press release does not note how many companies Titletown’s accelerator will have room for, but that “the employees of participating companies will spend 18 weeks working at TitletownTech and with its advisors and mentors on technology and business development project.”