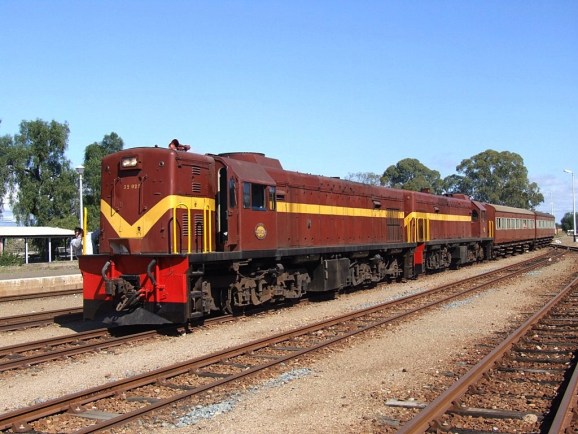 Freight trains are a slow-moving business, in more ways than one. The trains’ average speed is well under 30 mph on U.S. rails, according to the Department of Transportation. But the speed of innovation has also been quite slow, said Wesley Mukai, CTO of GE Transportation.

A locomotive is a 30-year investment, and until now there hasn’t been much drive to upgrade the industry on a faster timescale. But the progress of artificial intelligence in self-driving cars and trucks, and even in consumer apps, is putting pressure on the centuries-old rail industry.

Autonomous vehicles will blur the line between trucks and trains, forcing the rail companies to compete with the faster-moving automotive sector. Take platooning, in which several robo-trucks follow one driven by a human.

“In many ways you can think of it as a mini-train,” Mukai explained in a panel discussion on artificial intelligence and transport at VB Summit 2017 in Berkeley, California.

When autonomous trucks go mainstream, which Mukai says will happen “faster than people expect,” the old rule of thumb that shipments over 1,000 miles always go by train may no longer hold.

“And that’s going to have a great impact on industries like [rail], because now we have to rise to that challenge,” he said.

Trucking companies estimate time of arrival for shipments within hours, for instance, whereas delivery is calculated within a range of days for rail shipment. But Mukai is optimistic that AI will help his industry catch up. When it comes to scheduling, for example, training machine learning on large datasets of real-world delivery times could yield more accurate ETAs than the algorithms crafted by humans currently do.

GE can also crib from consumer companies, according to Mukai.

“I don’t have to look for the AI startup working on something specifically for the rail space, because the technologies are actually quite horizontal for me,” he said.

Trains have some advantages over cars. Navigation is simpler for trains, which run on a defined track, than for cars. And consumer-facing companies like Google provide a wealth of AI models that can be easily adapted for Mukai’s projects, achieving in a half hour of customization what would have taken weeks to do from scratch.

“We’re able to cherry-pick technologies that are in the consumer space, and they easily apply,” he said. This means GE can use three engineers to develop a project instead of 20.

Another thing GE is adopting from the consumer realm: the concept of a free beta product. Traditional enterprise companies tend to spend a long time developing expensive polished products — like analytics tools, for example — Mukai said. But machine learning models benefit from long periods of trial and refinement as more data passes through them. So Mukai advocates rolling out new tools, like an AI-driven ETA calculator for free.

“If it’s good, we’ll keep it in beta for a while,” he said. “And if the value’s there, it will get a lot of traction, and we’ll be able to figure out how to charge for it.”