The city or area you live in is a bubble. It has a uniqueness to the people, culture, and opportunities. I have spent the entirety of my life living within the bubble of the Midwest, specifically growing up in Central Illinois and then being in Indiana for my college and post-college years.

Based on a conversation with a friend in mid-May of this year, I determined I wanted to spend time in other bubbles to broaden my perspectives on my three passions: tech, startups, and education. So I packed up my car and set out on a Sunday in July to spend the next 84 days on the road. In total, I drove 10,348 miles, went through 28 states and D.C., and talked to dozens of people in up-and-coming tech communities like Kansas City and Austin, as well as top communities like Silicon Valley, Seattle, New York, and Boston. 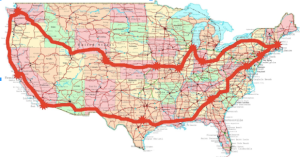 There are three things that coalesced from my journey that I think up-and-coming startup communities need to focus on:

1. You have to have a center of gravity

For each city I went to, I did some initial research about the tech scene online and tried to either reach out to or get introductions to some of the influencers in each community. A common question I was searching for the answer to, in either case, was “Where is THE place that I can go to get a sense of the tech community in this area?”

Two that really stuck out to me were 1871 in Chicago and Capital Factory in Austin. Both of those are coworking spaces the are unapologetically for high-potential tech startups, not freelancers and service providers. What this creates is a clear center of gravity for programming, incubators and accelerators, and investors. For example, 1871 had on-site mentors available every day (listed on a giant chalkboard wall), and several early-stage VC groups had offices in the space. It’s not exactly Sand Hill Road in Silicon Valley, but building a company is a contact sport, and being able to regularly have bump-ins or short catch-ups face-to-face with investors is a huge asset.

Most of the mid-market cities in the Midwest lay claim to having up-and-coming tech communities, including Minneapolis, Indianapolis, Cincinnati, and others. A report called Midwest Startups, developed by Chicago-based investment fund M25 Group, does a pretty thorough job of taking a data-driven approach to evaluating Midwest startup cities.

The reality is that perception really matters. For example, Indianapolis is an hour away from two of the top undergraduate engineering schools in the country, Rose-Hulman Institute of Technology and Purdue University, but the city has struggled historically to attract graduates to stay in Indiana, rather than flock to the coastal tech communities. Programs like Xtern, run by Indianapolis-based TechPoint, is helping expose more college students to the Indianapolis startup scene to improve those numbers, but we still have a long way to go.

3. You have to play the long game

Communities are built over decades, not years. Yes, a unicorn exit, such as the $2.5 billion acquisition of ExactTarget by Salesforce in 2013, has led to a windfall of new startups in Indianapolis. But those are rare occurrences in up-and-coming startup communities. In the years since (2013-2016), Indiana still ranked 30th in the U.S. for total VC funding, according to PricewaterhouseCooper data.

I believe communities need to think long-term about their strategy to foster successful startup communities. Communities need to develop strategies for attracting, retaining, and retraining talent pipelines for the myriad roles in tech startups. They need to think about how to create centers of gravity like 1871 and Capital Factory so that when coastal VCs are considering where to visit or set up an outpost office, it is clearly evident where the first place they should visit is. They need to think about community-building events like SXSW or HUBweek, a week-long event series that happened to be going on in Boston the week I visited (even better if they attract people from other communities like SXSW does). They need to think about how to attract and give entrepreneurs a kick-start with programs like Arch Grants in St. Louis and LaunchKC in Kansas City, which award grants to startups that commit to build their company in that community. None of these initiatives will likely have 2-3 year payback periods. They will take a decade or more to build into game-changers.

To become a top startup community will take a lot of hard work, leadership, and foresight, but is that any different than building a company? We should approach community building with the same mentality as startup building — just get started.

Nick Birch is the cofounder of PropelUp, a learning platform for software developers, and Eleven Fifty Academy, a nonprofit organization that exists to help close the nation’s technology skills gap.