It’s been a long time coming, but Uber is finally rolling out multi-stop trips to riders in North America.

You may have noticed a hullabaloo about this earlier in the year. Back in May, the company turned on the feature for a tiny subset of users in some markets, and in August it began to ramp things up across regions outside of North America, including Asia-Pacific (APAC) and Latin America. But now the feature is landing in the U.S. and Canada, with other markets, such as the U.K. and Ireland, expected to follow shortly.

With the upcoming app update, you’ll notice a “+” button next to the “where to?” location field. Tap that, and you can add up to three stops on your journey, which you can edit, add to, or remove at any time during your ride. 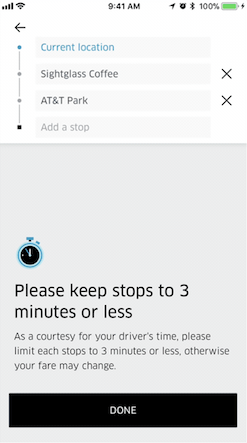 Anyone familiar with Uber will know all about the company’s ongoing issues with multiple pickups / drop-offs. Though in theory it shouldn’t be too difficult to arrange stops verbally with a driver, the fact that Uber charts fares in advance can cause problems if you want to deviate too far from the original path after you get in the vehicle.

Now, you can be transparent with the driver in advance and let them know exactly what stops you want to make and in which order.