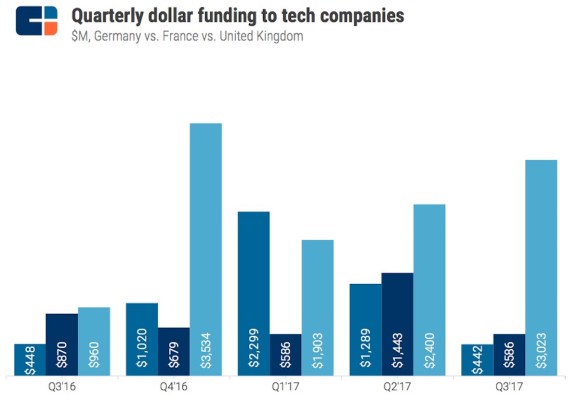 Not only has the decision to leave the European Union not dented London’s startup scene, it seems to have actually widened its lead as Europe’s leading fundraising destination.

The positive results were driven by six companies that raised rounds larger than $100 million in the quarter.

The bottom line: The U.K. — long Europe’s startup star — continues to pull further ahead. It’s a surprising twist that poses some interesting and unexpected challenges as the U.K. renegotiates its relationship with the continent over the next two years.

The concern for many in London is that Brexit could limit access to talent as well as shifting fundraising dollars to countries that remain in the EU and can therefore guarantee access to that market. But for the moment at least, investors don’t seem too concerned.

Likewise, if VC dollars continue to concentrate in London, European startups may find themselves facing difficult choices about whether to relocate there, even if it means leaving the EU zone.

Of course, Brexit negotiations are ongoing, and no one has a clue what the final deal will look like. But for now, it seems London may not be facing the doomsday scenario some had initially feared.