We’ve all collected something at some point in our lives — stamps, comic books, baseball cards. These are all physical assets, but Quidd is trying to bring the same excitement to the digital world by providing an online marketplace where users can purchase and trade rare digital goods, like stickers, GIFs, and 3D toys. The concept seems to be generating considerable interest, as Quidd today announced a $13 million investment led by top tier VC firm Sequoia Capital.

“We live in a frictionless world where everything is easy to get,” said Quidd cofounder and CEO Michael Bramlage, in an exclusive interview with VentureBeat. “A Snapchat filter, for example, is so ubiquitous, everyone can get it.”

What he and cofounder Erich Wood are proposing is a marketplace in which digital goods sell out and users can’t always get what they want, thereby creating a “collector” mentality.

Founded in 2015, the New York City-based startup of 30 employees launched in March and claims to have sold over one billion individually serialized items to more than three million unique users since. 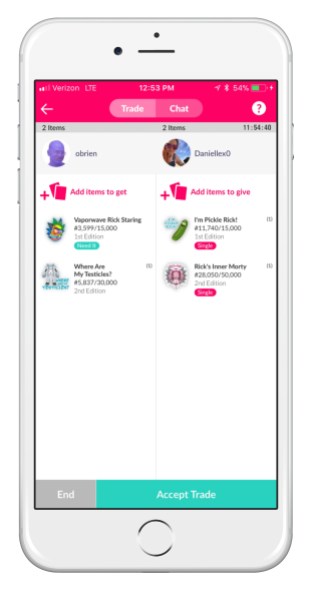 Above: Trading Rick and Morty stickers on Quidd

Users download the Quidd app — available on both iOS and Android — for free, create a profile, and start purchasing digital goods. Prices vary, according to Bramlage, from three cents for a pack of stickers to $30 for a high quality digital toy. Users can then interact among themselves by chatting and trading goods. Although the marketplace attracts a wide age group, the appeal is strongest with Generation Z and millennials that “live their lives online,” Bramlage said.

According to the startup, the majority of activity takes place on the Quidd platform, where users buy, trade, collect, and showcase their items. Outside of the app, users can share stickers on iMessage chat.

Quidd partners with media and entertainment companies to propose an extensive catalog of digital goods. The startup claims to have hosted more than five million trades involving a total of 60 million individual items by partnering with HBO Global Licensing and Marvel Entertainment, among others. Fans will find digital goods from Game of Thrones, Thor, Spider Man, Rick and Morty, and more. 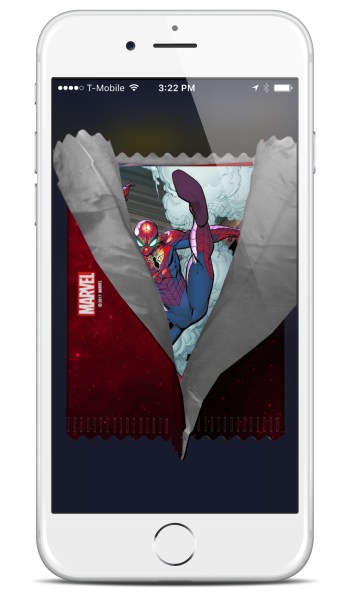 But, like physical items, digital goods can be stolen, leading to illegal copies. To this point, Bramlage says: “We maintain this ledger technology that has a meticulously recorded notion of ownership. Files cannot be copied or shared.” If this is true, then owning such an item becomes even more appealing.

The appeal to media and entertainment companies is pretty obvious — a new revenue stream. In addition to physical merchandise like toys, figurines, and costumes, they can now add digital assets to their sales. In light of the interest pouring in from such companies, Quidd will be opening a new office in Los Angeles next year.

To the question of whether there is a real market here, Bramlage says: “If you can sell $5,000 worth of Rick and Morty GIFs in under an hour, you’re onto something. It may sound silly, but underneath it all is a notion of digital ownership.”

Sequoia Capital partner Omar Hamoui, who will be joining Quidd’s board of directors, agrees. “Whether it’s cryptocurrencies, virtual goods, or just skins in popular PC games, digital ownership is becoming an increasingly important part of our lives,” he wrote in an email to VentureBeat. “The market for digital ownership spans a number of areas that each can be measured in the billions of dollars.”

Bramlage doesn’t plan on stopping at stickers and GIFs. The chief executive wants to create a platform that will facilitate digital ownership in a wide variety of applications, such as gaming, music, and AR/VR.

To date, Quidd has raised a total of $20 million, and the startup will use the fresh injection of capital to double the size of its engineering team. A number of undisclosed existing investors also joined this round.