Google Chrome is going to war against low-quality ads and autoplaying content with sound next year. Now the team is adding a new target to its list: unwanted redirects.

Google today shared that 1 out of every 5 feedback reports from Chrome users on desktop mention encountering some type of unwanted content. As such, the company has announced a series of protections designed to fight deceptive behaviors intentionally designed to mislead web users.

The company is taking a comprehensive approach. Links to third-party websites disguised as play buttons or other site controls, transparent overlays on websites that capture all clicks and open new tabs or windows, or just redirects that happen out of the blue — Chrome will try to stop them all next year.

For the second protection, coming in Chrome 64, Google has found that many redirects are coming from third-party content embedded in the page. In these cases, site owners don’t intend for the redirect to happen at all. Here’s how this protection looks like in Chrome for Android (note the infobar that says “Redirect blocked”): 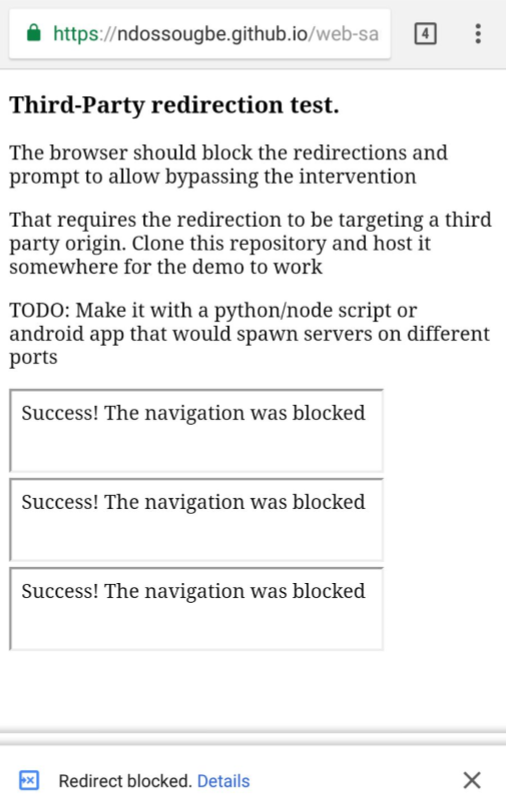 For the third protection, it’s clear Google is tackling something the developer is intending to do. Google admits these sites are effectively circumventing Chrome’s pop-up blocker by exploiting how redirects work. This feature will allow the user to continue directly to their intended destination, while also preserving the context of the page they came from.

In other words, Chrome 65 will stop nonsense like this:

It appears Google really wants to clean up the web next year. With over 1 billion Chrome users, the company is certainly in a position to make that happen.