A few years ago, two friends moved country. However, they realized they were each losing thousands of dollars to their banks. They set out to fix that problem. The business they built now saves hundreds of millions of dollars for people all around the world.

A new world, but a very old problem

Imagine you’ve moved to a new country. The air is different, the language a blur, at every turn there’s something unfamiliar. The rush of life leaves a totally different sensory impression. Often exciting, occasionally enraging, endlessly eye-opening — it feels like you’ve entered a new world.

It’s a familiar feeling for Taavet Hinrikus and Kristo Käärmann, co-founders of international money transfer company TransferWise. They arrived in the U.K. as immigrants some 10 years ago, after leaving their native Estonia.

Little did either know, however, they were paying a hidden premium on their new lives. No-one warned them about this because no-one, apart from their banks, knew it.

Frustration at being overcharged by the bank

Both Taavet and Kristo had to transfer money each month between euros and pounds (to move their salaries and cover their mortgages and living costs). The problem? With every transfer they were losing five percent of their money in extortionate transaction fees and terrible exchange rates.

Those bad rates ended up costing them a small fortune. That’s why they built TransferWise, which charges less than 1 percent, saving its millions of customers over $2 million a day, according to the company’s estimates.

Hinrikus, Skype’s first-sever employee who was then working as its director of strategy, explains: “I was getting stung by a bad rate every time. Eventually, I just said ‘enough’”.

They didn’t like the old way. So they built a new one.

The frustration of using a bank formed a stark contrast to what Hinrikus was trying to achieve with Skype.

“I spent my workdays at Skype creating a more connected world. We were shrinking the distances between people, making it easier to connect across countries. Then I’d go to my bank to transfer my euros to pounds and it was like going back in time 50 years: Expensive, inconvenient, and painfully slow. It was a nightmare.”

For Käärmann, dealing with an outdated system was less of a surprise (he’d spent several years as a banking consultant). But it didn’t smart any less:

“The banks were making a killing on people like me, not to mention small businesses, freelancers — anyone getting paid or making a payment in another currency.”

“Build a better way than the banks. So that’s what we did.”

A lifehack that turned into a billion-dollar business

It started off as a simple lifehack. Instead of using the bank, Hinrikus gave Käärmann his euros, and Käärmann deposited his pounds in Hinrikus’ U.K. account. They used the mid-market rate from Reuters (it’s the one banks use to trade with each other, but not the one consumers get). That meant they lost no money in an exchange rate mark-up.

Six years later and that’s still TransferWise’s basic model, albeit with bigger amounts. Since Customer One made a £2,000 transfer (“they just read a blog about us on Techcrunch and sent us a payment — it was incredible, really”, says Käärmann), TransferWise has grown substantially.

From two guys and a computer, it’s now a business with 800 employees. It has millions of customers in over 60 countries, who are sending billions of dollars through the platform, all gaining access to the mid-market rate and generally faster payments.

Reaching more people is the goal, according to Käärmann, but with a sharpened focus on their business offering to complement their strong consumer base.

“To strengthen our business product, we’ve created the Borderless account. It’s an account that’s not limited to one country, so your money iswith you no matter where you are in the world. Imagine paying that freelancer in Australia or supplier in India without having to worry about currency conversion.” 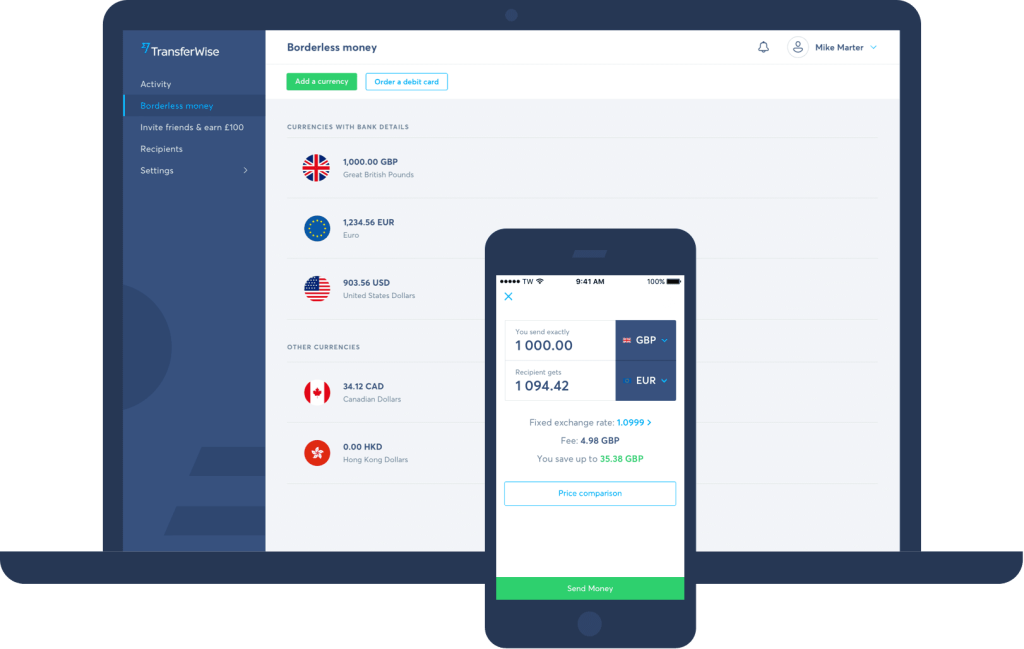 The first cutomers to benefit from the Borderless account will be businesses and freelancers, but a consumer card is in the works. Given that freelancers make up a third of the U.S. workforce, the company expects hot growth here.

Money makes the world go round? Not quite…

Why spend all this time building a money transfer platform? What motivates these founders?

“People say money makes the world turn around. But for most of us, it’s less abstract than that,” explains Käärmann. “Your money goes toward that gift you’re planning for your family, it’s for the food on your table, or the rent on your home. We want our customers to be able to think about those things, not about how much money they’ll lose when they make an international transfer.”

That philosophy is powered by a tremendous focus on customers.

“We’re making money move more freely. We work hard to fix every problem our customers face when it comes to moving their money between currencies,” says Käärmann. “The world is a better place when people and ideas can move more freely, but the ability of your money to move across borders is a massive part of that equation.”