At Web Summit this week in Lisbon, Portugal, Reddit CEO Steve Huffman talked about the site’s upcoming redesign. Reddit launched in June 2005, and its look and feel has changed little over the past decade — certainly not at all in the past four or five years. We sat down with Huffman to dive a little deeper into the redesign and why he deems it critical to the site he cofounded.

In January, Huffman announced the plan. In July, Reddit raised $200 million (at a valuation of $1.8 billion) to redesign its website. The company started 2017 with some 140 employees. It now employs 250. Huffman believes Reddit needs to “catch up” in terms of look and feel before it can start truly innovating.

Reddit is also working on a slew of other projects to improve the site. The company is tweaking the algorithm to improve relevancy based on time spent in individual subreddits, running various experiments to improve onboarding of new users, building new content creation tools, improving moderation tools, tweaking what and how you can post on your profile, creating an event content type for pre/during/post coverage, improving content relevance for users abroad (50 percent of Reddit users reside in the U.S.), and exploring how to proactively grow internationally (80 percent of Reddit is in English).

But all of this pales in comparison to the upcoming redesign.

Every so often, someone on the web asks why so many poorly designed sites (Reddit, Hacker News, 4chan, to name a few) are so incredibly popular. The answer is hotly debated but always boils down to: Content is king. The one thing these sites do well is get out of the way and let the content do the talking.

Huffman explained that one of the best pieces of advice he ever received was a general business statement about restaurants: “People will put up with long lines, expensive prices, and bad service. They will eat at your restaurant if the food is good. And that’s the way I’ve always thought about Reddit. Our content is our food, and as long as the food is good, nothing else matters. That’s why Reddit — despite the product that doesn’t change, despite management that’s nonexistent or not very good, just being murdered in the press for five years, and an onboarding process that’s hostile, would be a generous way of describing it — continues to grow. If the content is good, if your business is producing real value, that can make up for a lot of other sins.”

Nonetheless, Huffman believes a redesign is necessary for Reddit to progress.

“Reddit did not succeed because it has a shitty UI,” Huffman said. “Reddit succeeded despite having a shitty UI. Reddit is succeeding because we have great content. We have people sharing themselves, helping each other, and creating all sorts of wonderful things. That core mechanic is what makes Reddit work, and that’s not going away.”

When asked about the dos and don’ts of redesigning your site, Huffman said the two were closely related. He offered two lessons for those considering a redesign. “Do: Make sure you’re trying to solve real problems. Don’t: Just create busy work for yourself.”

That’s all fine and dandy, but I still didn’t understand what is driving this decision. Huffman offered a few reasons, but the biggest motivation is the potential for huge growth.

“Desktop is no longer our largest platform,” Huffman revealed. “Reddit is actually majority mobile now, if you include mobile web. Our native apps, released about a year and a half ago, are still a minority of our daily active users, but are nearly 50 percent of our pageviews. The engagement in our native apps is very, very high compared to every other platform. Pretty much like 3x to 5x in every dimension. And part of that is because it’s a phone — it’s always on you and always accessible — and part of that is because the UI is modern, is a lot better. But the content is the same. That’s what makes me really excited about the redesign because the content is not changing, but the appearance of it is.”

Reddit gets 3 million to 9 million new users every day that it does not capture, Huffman told VentureBeat. The spread of 6 million users is likely lurkers and incognito users that don’t want to be captured. But either way, every day, a few million new users arrive and never come back.

Huffman strongly believes the drop-off is due to the site’s design. “New user behavior is different from lurkers. For example, new users never go to communities because they don’t know communities exist. They don’t read comments because they don’t know comments exist. There’s a cohort of new users that are lost. I fundamentally believe that Reddit has something for everybody. If we get the presentation right and the experience right, the users will sign up. I make this claim that Reddit has something for everybody, but if you go the frontpage, it’s hard for somebody to find their home.”

Wooing new users aside, there’s also a huge amount of technical debt that the team wants to get rid of. The hope is that the redesign will give the team a platform upon which it can iterate quickly.

“The code that Reddit is running on right now, that generates our website, a lot of that is code that I wrote about 10 years ago,” Huffman told VentureBeat. “And then you’ve had dozens of developers come through there. It’s really hard to work on the codebase. That will be a nice improvement; we’ll just be able to move faster.”

And of course, the redesign will enable Reddit to more easily sell what advertisers are already buying. Reddit’s most popular ad is text and native to the site experience. Native is a good thing in terms of user experience, but it also means the Reddit sales team has to build every ad from scratch with every new advertiser. That’s difficult to scale if Reddit wants to accelerate its growth.

So the redesign is supposed to achieve a few things: boost engagement, improve the experience for existing users, get new users to join, revamp the code base, and bring in more revenue. Oh, and hopefully don’t piss off the power users.

For those wondering what the redesign means for the Reddit Enhancement Suite (RES), Huffman wants to assuage their fears. RES should continue to work just fine.

“The lead maintainer of RES works at Reddit. RES is used by a lot of our power users, so RES was kind of our starting point. At Reddit, as an employee, you’re not allowed to use RES. For two reasons. One, our product needs to be good enough that you don’t need it, and so like do your job and make sure it’s good enough. And two, for security reasons. So yeah, RES was our starting point.”

What about the users who already hate the redesign?

“I know there are people who are just going to be stubborn about it, and I think we just have to accept that,” Huffman said. “We’re going to try to be as respectful as possible. Our purpose is to make the site better for them. Sometimes users don’t always see that or don’t always agree. We’ll keep iterating, and I’m very confident we’ll get there in time.”

Huffman also talked about polish, noting that on a macro level, the redesign is already complete — it’s functional, but there are still many little friction points that can be really painful. He cited the infamous estimate that you spend 80 percent of your time doing the last 20 percent of work. “And that’s where we are right now. We’re trying to make sure the details are right, because those details are very important.”

The card view behaves differently depending on the content type. But in short, it requires less clicking as images are already expanded, videos play in-line, and so on.

The card view in its current iteration looks like this: 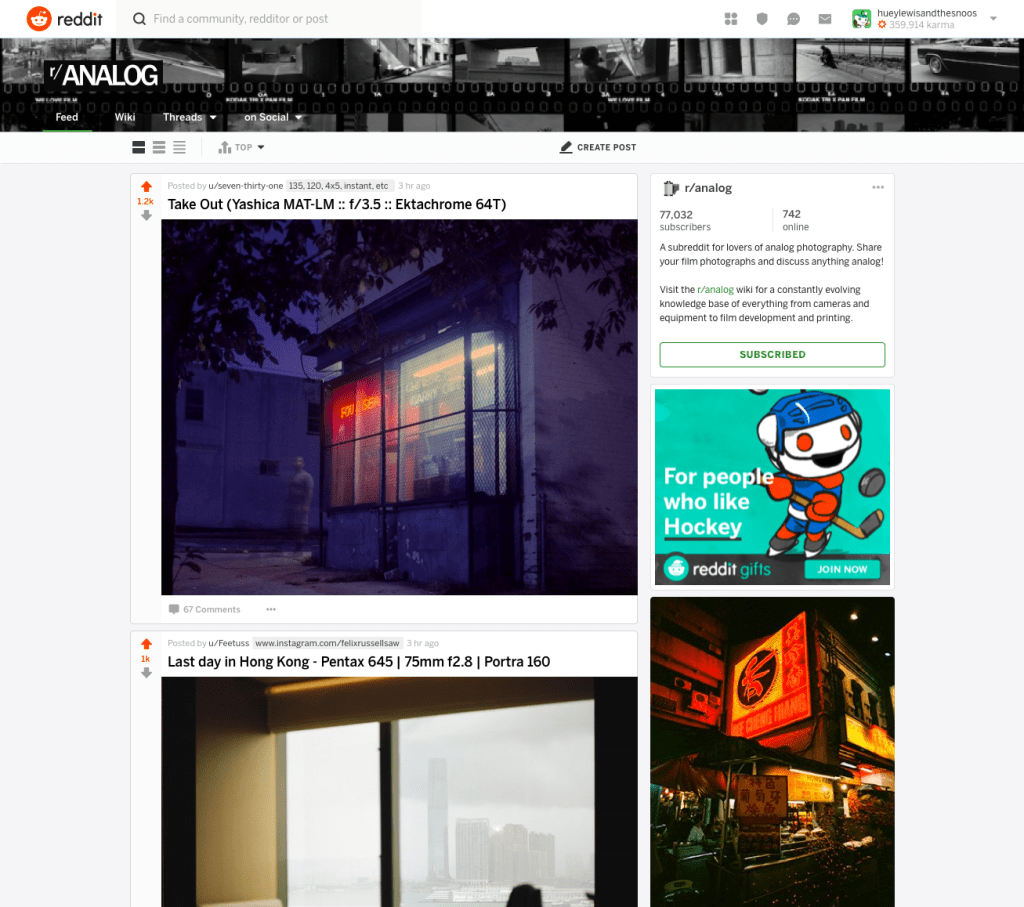 Huffman also addressed criticism that the card view looks like another popular site.

“When people say it looks too much like Facebook, I think that’s a lazy criticism. Reddit is a list of things. To the extent that our site is a list of things, and many websites are lists of things, it’s not surprising that we look similar. But what really matters is the substance of the content and who is behind it, and that’s what makes us special.”

And for the record, the card view won’t necessarily be made the default for everyone. That hasn’t been decided yet.

“I wouldn’t rule out making, for example, [classic] the default for power users. We don’t have to build a perfect product that works the same for everybody,” he said.

This is the classic view, which is almost identical to how Reddit appears right now: 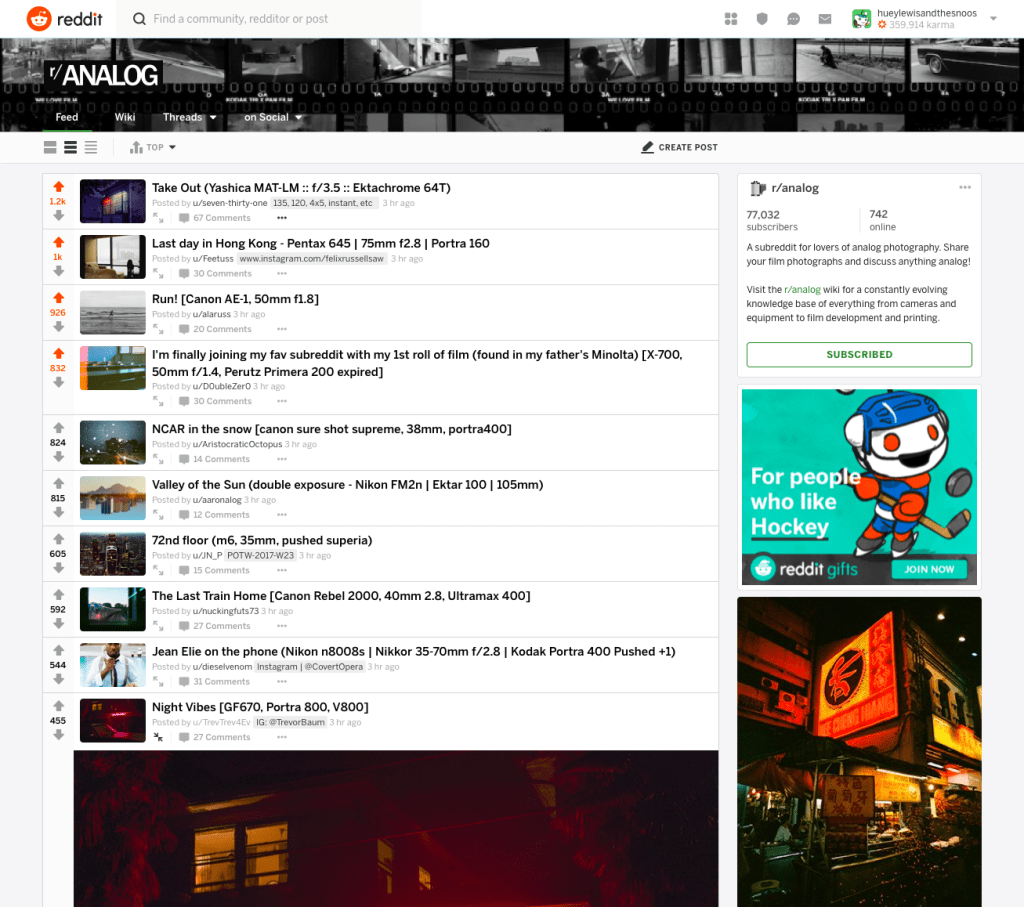 This view isn’t going away, at least not anytime soon. “It doesn’t really cost us to run the old site. So we’ll run that for as long as we need to. Indefinitely if we have to,” Huffman said. “It would not be my preference, just from a focus point of view. But we know people have tools built around that site, have plugins and workflows that are really important. I’m not going to rush to turn it off, but I am going to rush to turn the other one on.”

I pressed Huffman on whether the classic view will still be updated. He said that yes, it will not be shelved.

And finally, the compact view: 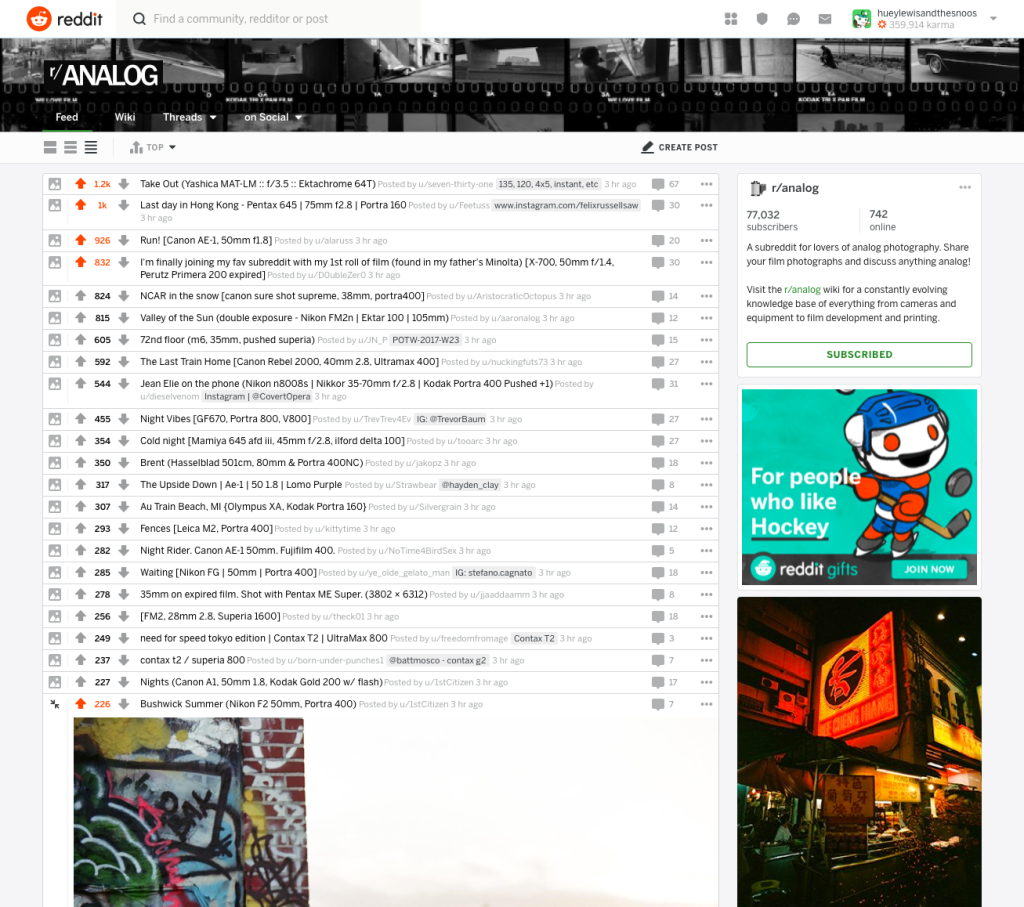 This one is clearly for power users, even if it might seem a bit ridiculous at first glance. There’s something about being able to see everything on one page that many geeks like yours truly gravitate towards.

While these three views have been set, there are still many aspects that haven’t been finalized. The biggest is around text posts, which account for 60 percent of Reddit content.

“We’re dramatically improving text posts, giving people a rich text editor,” Huffman said. “So instead of just having a paragraph and a couple of links, you can make a full blog post if you want. I actually think text posts are going to get a lot nicer and easier to do. The new editor is probably my favorite part of the redesign.” 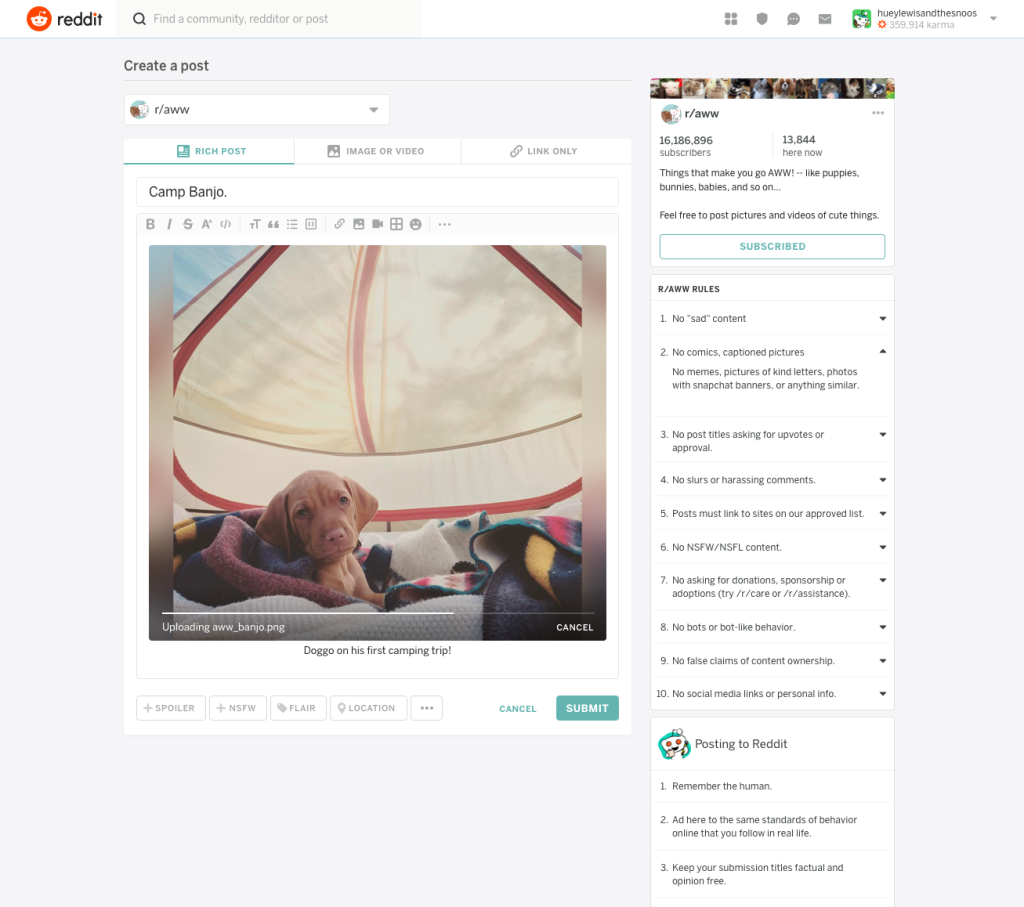 As a Reddit user, that worries me almost as much as how the defaults will work for the various groups of users. Formatting text is fairly easy to abuse, and that can hurt the experience more than a redesign can improve it.

As for how text is going to appear on the frontpage, Huffman says there are various listing formats being tested, including ones that show just the title, a snippet, and the full post. The team will be gathering data on what users like best.

The rollout strategy is a gradual one that Huffman described as a series of switches. “But no, we’re not just going to flip a switch. Honestly, I think that would be suicide. We’ve seen it before.”  The main reason for this is simple: Reddit doesn’t want to piss off its users, à la Digg.

Right now, the redesign is in an invite-only stage. Some Reddit users are already trying it out and providing feedback. The company even has some users come into its office and use the site as the team watches.

In December, all Reddit users will be able to opt in and try out the redesign. In Q1 2018 (the goal was previously Q4 2017), Huffman hopes to turn on the redesign for all users, by default.

Even then, there will still be one more switch to flip, Huffman says: setting what first-time users see when they visit the homepage. What that will look like is still up in the air.

Most importantly, though, users will still be able to switch between the three views: card, classic, and compact.

“I hope that helps soften the blow,” Huffman told VentureBeat.