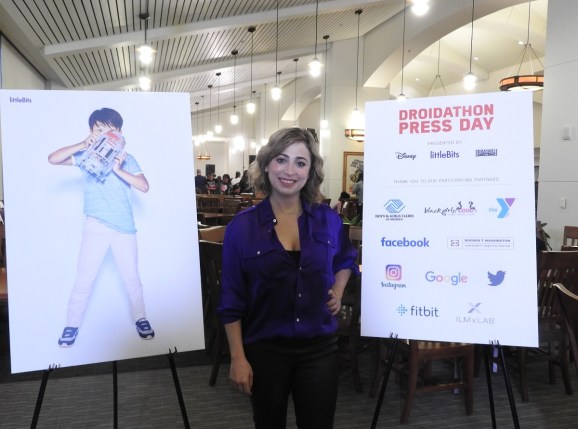 Disney’s Lucasfilm opened the doors of its campus in the Presidio in San Francisco to hold a Droidathon, a contest aimed at promoting science, technology, engineering, the arts, and math (STEAM) education for children.

Facebook, ILM, ILMxLab, Google, Fitbit, and Instagram volunteered engineers to make droids based on the electronics kits from LittleBits. Children from the Boys & Girls Clubs of America voted on the best creations.

“You guys are the next generation,” said Ayah Bdeir, founder of LittleBits, which makes the new Star Wars Droid Inventor Kits used in the contest. “You are creating the technologies of the future.”

She announced the LittleBits Invention Competition, a national contest that will run from November 15 to January 10. LittleBits will travel around the country holding promotional events, and prizes will be awarded in January 2018. 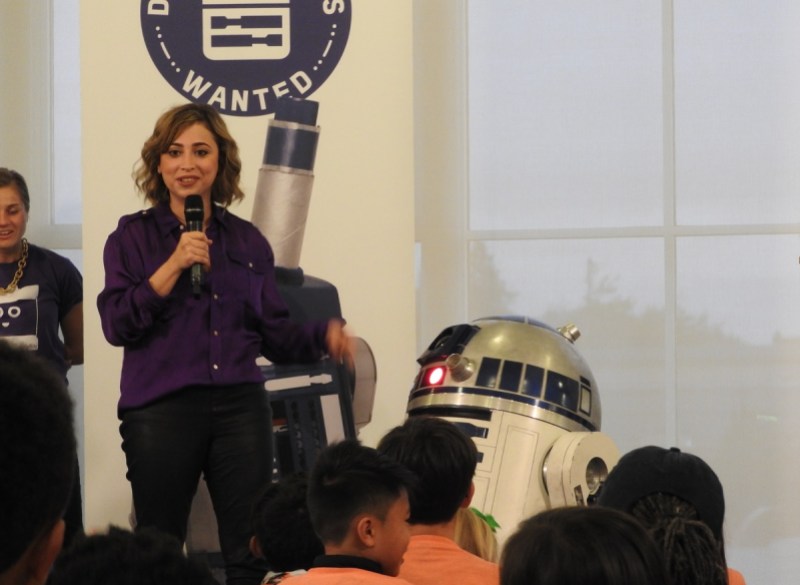 Above: Ayah Bdeir of LittleBits kicks off a Star Wars Droidathon.

Judges of the national contest will include Kathleen Kennedy, president of Lucasfilm; Daisy Rigby, who plays Rey; and Kelly Marie Tran, who plays Rose in Star Wars Episode VIII: The Last Jedi.

In an interview, Bdeir said she started LittleBits in 2011 to focus on teaching adults how to build things with electronics. But as children became more engaged, the company switched its focus to kids.

“The problem is the interest level of kids drops dramatically from ages eight to 12,” Bdeir said. “It’s a sharper decline for girls. Kids who aren’t geeky self-select out. Some don’t know they would love it. We focus on the kids who are outside the choir.”

While there are other tech toys for kids, like LEGO First Robotics, the emphasis on robots can steer too much toward boys. So Bdeir said LittleBits has focused on making electronics for everyone. 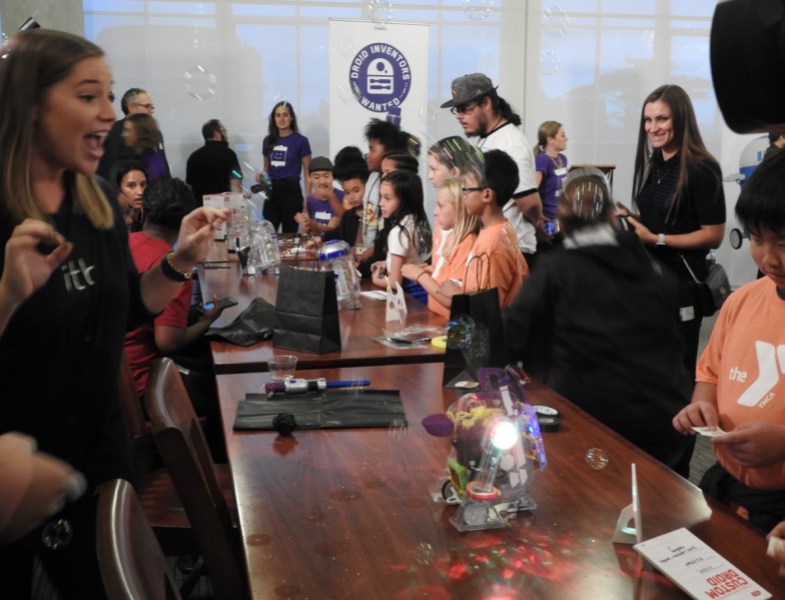 Last year, LittleBits went through Disney’s accelerator and hooked up with Lucasfilm to make a Star Wars electronics kit. The Droid Inventor Kit went on sale for $100 in September, and it’s getting wide distribution at retail outlets such as Walmart, Disney, Apple, and Amazon.

“Star Wars is a match made in heaven for us, because it’s a story about tinkering and solving problems,” Bdeir said.

She added, “It’s transformational. We did this for six years, and we have been a leader in this space and with STEAM. But when you get the credibility of Star Wars, you can speak to a much bigger audience and get kids more engaged because of the story. It’s a chance to have a movement. Think of the kid in your life who maybe hasn’t found what their passion is. Or is curious but not doing well at school. Or is a problem solver. Particularly kids who are not of your typical background, like girls, or kids at risk.” 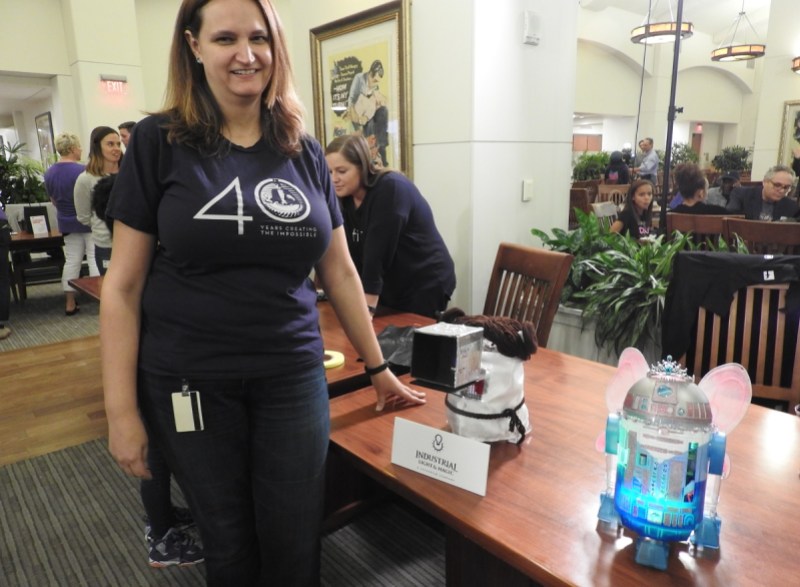 Above: Rachel Rose of ILM

Rachel Rose, a supervising engineer of research and development at Industrial Light & Magic (the special effects arm of Lucasfilm), said in an interview that she gathered a team of a half-dozen female engineers to create one of the droids from the LittleBits kit. They built a Princess Leia version of R2-D2 with buns that spin and a hologram of Leia from the original film. Her team won one of the awards on Wednesday.

“I personally have a very strong interest in STEAM education, especially for young women and minorities. I want younger girls to realize this is something that they can do.” 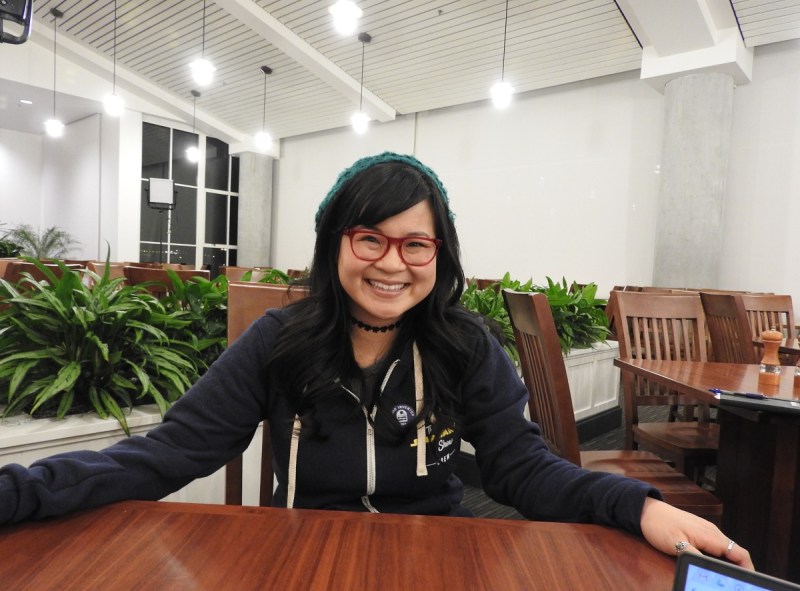 Kelly Marie Tran, the actress who plays Rose Tico in Star Wars Episode VIII: The Last Jedi, was at the event. She said she loved the idea of inspiring kids, and she believes her character, who spends a lot of time with Finn solving problems, is a great fit for the contest and the STEAM theme. Growing up, she wasn’t a geek or a Star Wars fan, but she thinks that actually helped her land the role during the five-month audition process.

“I think it’s such a cool event,” she said in an interview. “Being an actor means you are constantly faced with different problems. It has that same idea. She’s smart. She’s brave. She’s self-reliant. The idea that you can come from anywhere, be put in a situation, and solve a problem. I am inspired by people who can solve abstract problems with math, innovation, and science.”