These numbers seem absolutely absurd for projects that are essentially seed stage investments, but the markets are not completely irrational.

The purpose of doing an ICO for your blockchain project goes beyond just raising money. While capital is extremely important, the ICO has another powerful effect: It gets your tokens into the hands of people who are incentivized to help your network grow. Early adopters will not just spread the word about your protocol, they are also likely to use your protocol as it was intended, further increasing the value of their own holdings.

If you bought early shares in Facebook, you would be financially incentivized not only to invite your friends to Facebook but also to post pictures on Facebook so when your friends log in, they don’t experience a ghost town effect. This theory applies to blockchain projects as well: If you were an early investor in Filecoin, you are likely to be host or a client (or both!) when the software is actually released. This usage drives network effects, which are especially hard to create in the very early stages of a network’s life. The “crowd” part of crowdfunding is just as important as the “funding.” 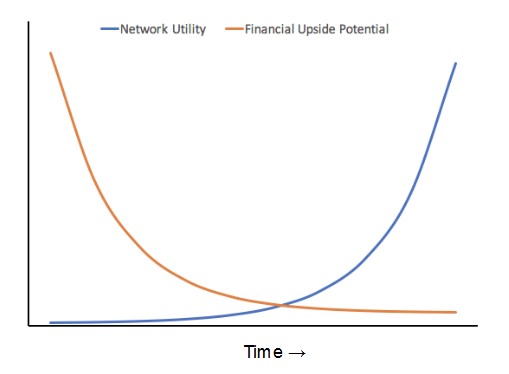 The market has been distorted because investors see the winner-takes-all nature of these networks. Let’s use another social media example to illustrate this. It is best for an early stage social network to have its “shares” in as many hands as possible to accelerate the creation of network effects. If an investor sees the potential of this new social network to become the dominant social network, they will want to buy – and hold – as many shares as possible. While this is worse for the network as a whole, it is better for the individual investor – classic application of game theory. When you apply this incentive structure at a system level, it’s clear how ICOs can raise tens of millions of dollars from just a handful of people in less than one minute.

Easy problem to fix, right? The ICO team should just limit the amount of tokens any one person can buy.

Because of the pseudonymous nature of Bitcoin and Ethereum (your addresses are not tied to your real identity, and you can create as many addresses as you want, perpetrating what is known as a Sybil attack), initially, there was no easy way for the team running the ICO to limit any given individual’s investment. The only way to ensure that everyone who wanted to participate had an opportunity to do so was to run an uncapped ICO, which led to ridiculous amounts of money being raised at absurd valuations for seed stage projects.

Imagine if Uber had to raise the full $9 billion it has raised over 14 rounds in one round before it had an operational app or any drivers, or if Facebook had to raise $2.5 billion before there was a single photograph uploaded to its servers.

Early stage venture capitalists invest knowing they will be diluted as a company grows and raises additional capital. This is counter to one of the core values of the crypto community. The number of tokens for all major crypto protocols is either fixed or grows predictably as newly minted tokens are distributed to the community according to predefined rules. Most protocol development teams have embraced this concept, preventing themselves from issuing more tokens to fuel growth.

Developing and marketing software that works at a global scale is expensive, and that hasn’t changed with the advent of blockchain technology. Because the supply of talented blockchain engineers remains extremely limited, it is currently more expensive to develop a blockchain based protocol than a similar conventional app.

Developing the software is only the first step. After a version one is launched, teams still need to market the protocol. Filecoin will be worthless if people don’t use it, and you can be sure the required marketing and sales effort will cost a pretty penny, or Bitcoin. Protocol development teams set their ICO fundraising targets extremely high because they have enormous capital needs and know they will not get another chance to raise capital.

Most ICOs are structured with several layers of presales preceding the actual public token sale. Investors in the presale typically receive bonus tokens for their investment. These bonuses can be enormous, on the scale of 100 percent (doubling your money) or higher.

The earlier an investor commits their capital in the presale, the larger their bonus. Presale rounds are time bounded or capital bounded – meaning every moment an investor hesitates lowers their chances of getting into the earliest presale round and the largest possible bonus. This creates a lot of FOMO – fear of missing out. If the project is high profile or has notable backers, the FOMO is even stronger.

These ICO structures are designed to leverage human psychology in raising as much capital as possible as quickly as possible. Since tokens, unlike restricted stock in a startup, are liquid, investors are willing to invest more in a presale or ICO: They know they can offload their tokens to the market.

Several protocol development teams have implemented ICO policies that are positive and responsible:

The ICO as a fundraising mechanism is maturing rapidly. Investors are getting more experience with ICOs and know what to demand from projects. Service providers, such as investment banks, are offering to advise protocol development teams on how to structure their ICO according to best known practices.

We don’t want to return to the world where only a select few have access to investing in these assets and all the bias that involves. No one other than VCs benefit from deals negotiated behind closed doors. ICOs are here to stay, and while this fundraising mechanism might have growing pains, the future is bright.

Tushar Jain is CEO and co-founder of Multicoin Capital, a thesis-driven cryptofund that invests in blockchain tokens.