When I ranked last year’s top 10 startup ecosystems, they didn’t show much movement from the year before. But this year’s analysis has shown tectonic shifts in the world’s innovation landscape.

A new entrant has joined us this year, Shanghai, with Berlin dropping out of the top 10. Los Angeles has jumped from seventh to fourth in a tie with Stockholm, which dropped a spot. Beijing had the most dramatic increase, from eighth to a second-place tie with Tel Aviv. This rise in the list was driven by Beijing’s increase in unicorns from nine to 25 along with the city’s increasing accumulation of engineering talent in areas such as artificial intelligence.

A top-line driver for the changes in this ranking is the growth of venture capital investments in Asia. This year was the first time Asia surpassed the U.S. in total amount of venture capital invested. Investors put $19.3 billion into Asian companies versus $18.4 billion into U.S. companies in Q2 of this year. And that trend continued in Q3, with six of the top 10 venture capital deals going to Asian startups — half of them in China (four Beijing-based startups, one Shanghai-based, and one Taipei-based).

Here are the cumulative scores (out of a total possible 80 points) for each of the top 10 startup cities: 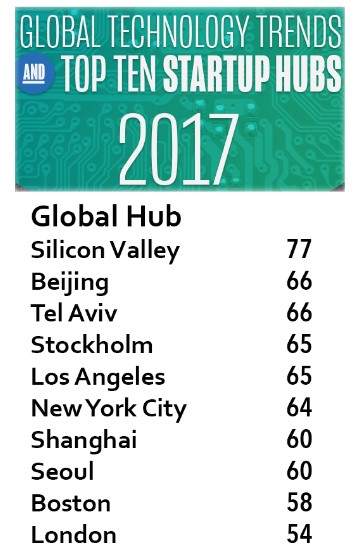 Our analysis is based on a venture capital and on-the-ground perspective of innovation ecosystems versus other studies, which might rely on surveys. We also take into consideration macro-trends, such as Asia’s rapidly growing middle class. The global middle class is expected to grow from 3 billion to 4.9 billion people, with two-thirds coming from Asia.

Asia is not only creating innovation but becoming the faster adopters of new technologies. From micro-transactions to mobile messaging platforms to blockchain technologies in enterprises, both consumers and companies are welcoming new innovations sooner in Asia than anywhere else.

While Snapchat’s IPO has made an impact on Los Angeles’ startup ecosystem, the jury is still out on whether it is a lasting impact and how it can take that ecosystem to the next level. I was personally hoping it could make Los Angeles a bit more competitive compared to its neighbor to the north, but I guess a year isn’t long enough to really see the influence of Snapchat’s IPO.

Beyond the top 10, we see up-and-coming startup ecosystems continuing to develop further, such as Paris, Singapore, Chicago, Shenzhen, and others.