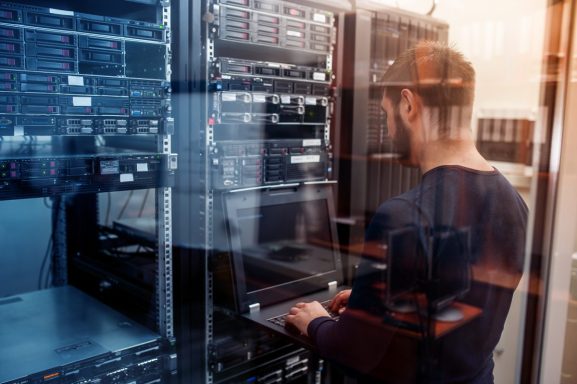 2017 was the year we saw artificial intelligence take off. Or was it?

If nothing else, AI continues to climb the technology hype curve. It was impossible to read the news, browse the web, attend a conference, or even watch television without seeing a reference to how AI is making our lives better.

Since Alan Turing declared “what we want is a machine that can learn from experience” in a 1947 lecture to the London Mathematical Society, the imaginations of computer scientists and engineers have run wild with visions of a computer that can answer questions on par with a human.

Today, almost everyone in business is looking at how to leverage AI, and there is no shortage of vendors looking to capitalize on the trend. Venture Scanner currently tracks more than 2,000 AI startups that have received more than $26 billion in funding.

In 1950, Turing developed the Turing Test to “determine a machine’s ability to exhibit intelligent behavior equivalent to, or indistinguishable from, that of a human.” Cloud, compute power, and open source technologies have reached the tipping point where we can now build systems (e.g. IBM Watson, the Jeopardy! champion) that actually pass his test, launching the start of the AI era.

There’s a lot of hype and a lot of AI promises, which can be confusing and create false expectations in this hype portion of the new technology curve. So with the year drawing to a close, I took some time to reflect on the state of artificial intelligence and networking with Turing-tinted glasses.

How AI affects the network today

I found several examples where AI already has a positive impact on the network experience today.

Detecting time series anomalies: Many devices running on today’s network were invented 20 years ago, and they don’t support current management messages. AI can detect time series anomalies with a correlation that allows network engineers to quickly find relations between events that would not be obvious to even a seasoned network specialist. For example, one customer turned off the lower data on their wireless access points, which indirectly caused a DHCP broadcast issue that severely affected the time for users to connect. Previously, it would have taken the team days to track down the cause of this problem. With AI and machine learning, the configuration logs identified the problem within minutes. We can teach systems to recognize this problem and automatically reconfigure the network.

Network data mining: AI can now use various data mining techniques and the power of cloud compute to explore terabytes of data in a matter of minutes. This process could take a network domain expert days, if not weeks, to complete. Expediting this process allows an IT department to quickly explore what network feature (i.e. OS, device type, access point [AP]) is most related to a network problem, helping IT departments quickly identify a bad AP, client OS, or network gateway causing performance issues.

Where will AI have a positive impact on the network experience in the next year or two?

Predicting user experience by application: Today, we determine application bandwidth through capacity planning and manual adjustments. Soon, AI will be able to predict a user’s internet performance, allowing a system to dynamically adjust bandwidth capacity depending on applications in use at specific times, and manual planning will be replaced by predictive analysis based on historical trends and current calendar information. The systems will recognize that companywide videoconferences are about to start and allocate network resources to optimize performance and efficiency, bringing AI to radio resource management.

How AI will affect the network further into the future

Here are examples of where we can expect AI and networking to be successful in the next three to five years.

Intermittent hardware problems: AI will be able to identify data coming back from an access point or mobile device that otherwise looks like random noise. For example, some network problems are temperature related. A device could stop working if it gets too hot. AI will be able to isolate these issues and identify components that require repair or replacement.

Recovering from systems failure: Today, when an access point fails and goes offline, the data that could troubleshoot the failure is lost. In the future, even if AI systems can’t prevent the failure, they will have the ability to predict it, and can capture and save data prior to the access point going down.

Indoor geolocation parity with GPS: Indoor geolocation still lags far behind the capability of outdoor GPS. AI algorithms will have the ability to identify coverage gaps in wireless networks with more granularity. However, it will be a while before we have self-installing robot APs that can automatically fill in coverage holes.

It’s easy to forget that AI is still in its infancy. The market has made tremendous progress, but there is still work to be done. This is apparent every time your device’s personal voice assistant doesn’t understand your question on the first attempt or the information provided is inaccurate. Our virtual assistants can and will get smarter.

There are decades of innovation ahead for AI. The computing power that exists today makes things possible that couldn’t be done five years ago. Quantum computing is still a twinkle in our eye, but there are already signs of it becoming a reality in the lifetime of my kids. And quantum computing will deliver a magnitude-fold rise in processing power and a significant catalyst in our AI adventure.

We aren’t there yet, but with each passing day, we get closer to Alan Turing’s vision.