Facebook has announced yet another initiative to clamp down on the number of spammy posts appearing in your News Feed.

The social networking giant has identified what is calls “engagement bait,” which are posts that specifically solicit actions on the part of the users, such as asking them to like the post if they agree with it, or comment / share it if they meet the criteria laid out in the content.

Facebook gives a handful of examples to illustrate what it means by “engagement baiting,” including “vote baiting,” “react baiting,” and “share baiting.” These include posts requesting you to “Like this if you’re an Aries,” or “Share with 10 friends for a chance to win a new convertible.” 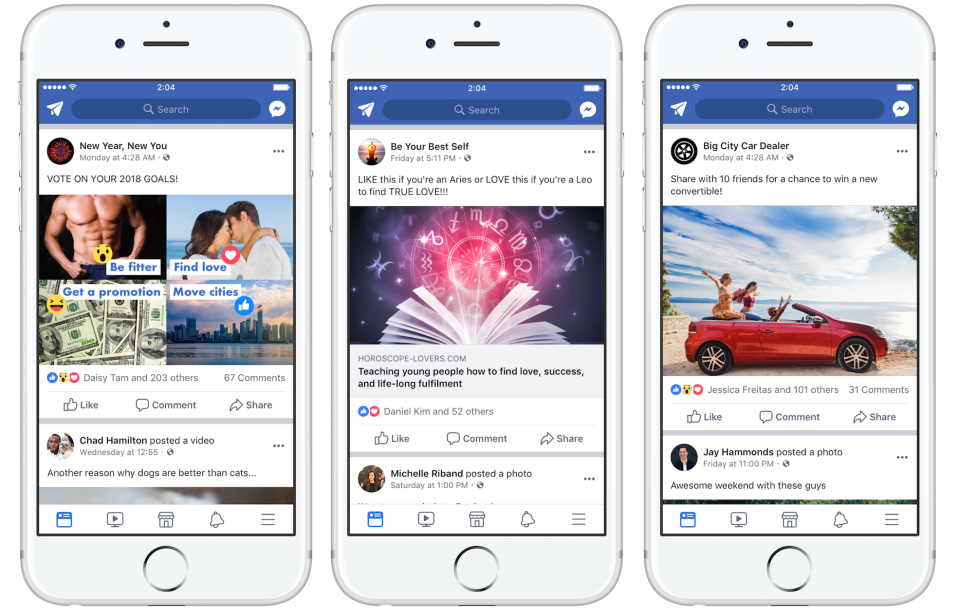 So why is Facebook averse to people and Pages sharing such content? Well, it all comes down to the company’s desire to promote higher-quality “authentic” content. Engagement baiting is often used as a means to game Facebook’s algorithms — if people are liking, commenting, or sharing a post, Facebook uses this as a signal that the post is organically popular and may automatically show the posts to even more users as a result. However, in these cases, users may simply have reacted to a post because they were asked to, without actually considering whether the post was worth engaging with — and this is the scenario that Facebook is looking to prevent.

“To help us foster more authentic engagement, teams at Facebook have reviewed and categorized hundreds of thousands of posts to inform a machine learning model that can detect different types of engagement bait,” noted Facebook in a blog post. “Posts that use this tactic will be shown less in News Feed.”

Once a simple conduit for friends to interact with each other, Facebook has emerged as a gargantuan information-sharing machine, with companies, marketers, and spammers the world over looking to garner as many eyeballs as possible. So Facebook has been pushing to improve its stickiness with users by bringing the focus back to authenticity. This effort has involved such measures as pushing clickbait to the sidelines and using AI to hide misleading, sensational, and spammy posts from your timeline.

Facebook has also been testing a new mechanism that would essentially divide the News Feed in two, splitting commercial posts from personal news, though this could simply be a way to get advertisers to pay more to have their posts appear in users’ personal News Feeds.

Facebook is quick to point out that News Feed posts that ask for recommendations, help, or advice won’t be impacted adversely by its latest algorithm changes. But in the coming weeks, it will begin to enforce “stricter demotions” of Pages that use engagement bait to game its system.

“We will roll out this Page-level demotion over the course of several weeks to give publishers time to adapt and avoid inadvertently using engagement bait in their posts,” the company said. “Page Admins should continue to focus on posting relevant and meaningful stories that do not use engagement bait tactics.”