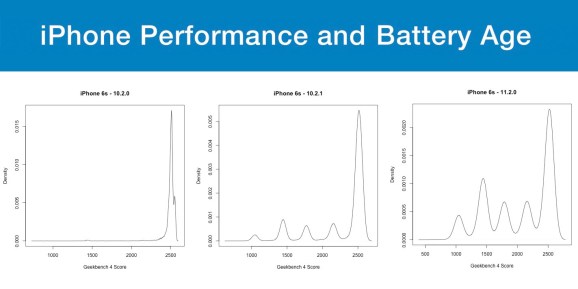 After Geekbench’s John Poole published a data-driven report this week linking diminished iPhone processing performance to battery age and iOS updates, a new wrinkle emerged in a long-standing debate over whether Apple was deliberately slowing down old iPhones. What if Apple programmed iPhones to slow down as battery power waned, knowing battery degradation was inevitable after a year or two of normal use? Confronted with the Geekbench report, Apple admitted as much yesterday. Now, Poole is calling for the company to be more transparent with iPhone customers about expected performance over time.

For years, and despite plenty of anecdotal supporting evidence, Apple apologists aggressively downplayed the idea that the company would cripple aging iPhones, even as Apple remained mostly silent on the matter. Yet Poole’s data showed that as time passed and new iOS software was installed, certain iPhones began to score markedly lower in benchmark tests. For example, Poole explained that an iPhone 6s initially scoring 2,500 Geekbench points on iOS 10.2 might score only 1,000 by the time iOS 11.2 shipped a year later. But it could also score close to 2,500, based on how sparingly the battery was used during that time.

Apple claims that Poole’s results are attributable to a year-old feature that prevents certain iPhones from “unexpectedly shutting down” when their batteries aren’t supplying “peak current” — something that can happen “in cold conditions,” on “a low battery charge,” or “as they age over time.” The feature is said to “smooth out the instantaneous peaks” demanded by high-performance apps “only when needed.”

“I’m pleased that Apple’s made a statement regarding this issue,” Poole told VentureBeat. “I understand the tradeoffs made in the fix for this issue — I think they’re completely reasonable. I just wish Apple had been more transparent from the start. In particular, I wish Apple would provide a notification to affected users so they understood what was going on with their phones.”

Poole’s call for greater transparency from Apple asks for two stages of battery-CPU performance disclosure: when a brand new iPhone is initially marketed and purchased, and on screen when the iPhone begins to degrade in performance. That’s entirely fair.

Right now, it appears that Apple is sneaking its “fix” in after each device’s release. Its statement notes that it has “extended that feature to [2016’s] iPhone 7 with [2017’s] iOS 11.2,” and “plan[s] to add support for other products in the future.” Though some aging iPhones may display a notification that battery replacement is advised, Apple doesn’t mention that processing performance will suffer — or that it can be addressed by swapping the battery.

There is another, less charitable way of understanding what’s going on with the affected iPhones. It appears that some of the company’s self-designed processors are, at peak, demanding more power than their batteries may be capable of providing — arguably an engineering problem. Unless the processors are capped with software that ties CPU performance to current (and over time, necessarily declining) battery conditions, the entire phone will shut down when that happens.

“While Apple can’t ‘fix’ existing hardware, I hope future iPhones are designed in such a way that this sort of software fix that limits processor performance isn’t necessary,” Poole notes.

Customers could reasonably shun devices — particularly ones fetching $1,000 — purporting to offer desktop-class processing performance, but only achieving those levels for a year or two before repair is required.

Is this an issue with non-Apple phones? It’s hard to say; there are so many Android phone models running so many buggy and possibly-since-patched versions of Android that app and device crashes aren’t exactly unheard of. But when asked, Poole said he’s “not aware of similar issues affecting Android phones (e.g., based on customer complaints) but we haven’t done an in-depth analysis yet.”

There’s certainly more to come on this story, particularly when users begin asking tougher questions about whether Apple’s marketed benchmarks are creating performance warranties that its batteries are subsequently undermining.