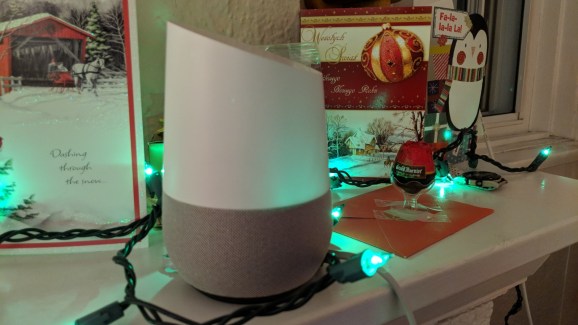 My parents have not heard of Alexa or Google Assistant, and probably have no idea Cortana exists on their Windows 10 computers. They may have approved of their son studying Computer Science, but they’re not particularly tech-savvy themselves. My father hates the burden of smartphones (he turns his off or leaves it at home at every opportunity) and my mother doesn’t even have a phone. I figured the original Google Home would be as decent a starting point as any.

My family is not big on presents during Christmas, or shopping in general. We buy what we need throughout the year and then draw a complete blank when there’s a special occasion. Still, I knew my parents would get me something small just because, and I happened to have an unopened Google Home lying around, so on my way out the door I decided to bring it along, if only to see how they would react.

Boy was this a good decision.

My dad was the more skeptical of the two, but he was very happy to make multiple Febreze jokes. Once we had the Google Home working, my mother gleefully informed the two of us that she finally had someone who would listen to her every command.

Side note: I set up the Google Home because the process is surprisingly long and annoying. The fact that you need a phone or tablet to get it going is understandable, although a little irksome, but the number of steps is excessive. My parents would have definitely given up after they plugged in the device — I doubt they would have bothered firing up Google Play on a phone or tablet to download the Google Home app, let alone going through all its instructions.

After all the taps and tests were done, the beautiful thing is that there is just one action to learn: “OK Google.” I have complete faith that I won’t have to re-teach my parents how to use the Google Home every time I come over. The lack of buttons and user interface is perfect for older generations. Both my parents quickly got the hang of talking to the device — interestingly, it also didn’t take long for them to figure out when the Google Assistant understood their request and when it didn’t.

The real joy, however, was watching my parents react the way kids do to something completely new. Wide-eyed and impressed, they wanted to know how this new piece of technology worked.

This wasn’t like showing them a new laptop, tablet, smartphone, or smartwatch. All of these are fairly similar and really just extensions of the traditional computers that my parents have used before. Smart speakers are voice-first, a completely new experience for many, especially if they’ve never talked to a digital assistant.

My only hesitation ahead of giving them the device was that its various features would be largely unused. All the complex actions Google Home can do are simply hard to discover, and since neither of my parents really uses a smartphone, they’re unlikely to try. The features related to events, meetings, calendars, and anything that expects a frequently used smartphone will be useless for them.

As far as I can tell, the Google Home will serve three functions for my parents: playing background music, checking the weather, and finding out what time it is in certain parts of the world.

But that’s fine by me. In fact, the Google Home makes more sense for them than it does for me: I perform all those functions on my smartphone, and I’m waiting until these smart speakers can do something that my phone really can’t.

Plus, watching my parents get excited about how far voice recognition has come was absolutely priceless.