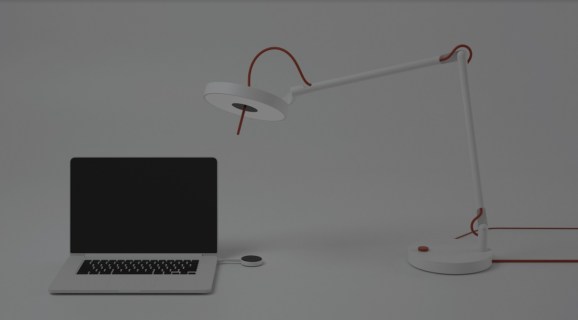 MyLiFi uses light to beam broadband to your laptop.

Oledcomm is debuting one of the more unusual CES 2018 products today with the launch of MyLiFi. The French company uses light from a smart lamp to beam internet broadband to your laptop.

It promises a speed of 23 megabits a second, faster than any Wi-Fi radio connection. MyLiFi is a light-emitting diode (LED) lamp that provides secure wireless internet access through light, the company said. Oledcomm will demonstrate the product at CES 2018, the big tech trade show in Las Vegas this week. It plans to launch a Kickstarter campaign in January and will set preorder prices at $500 (or €499).

LiFi is short for Light Fidelity (a reference to wireless fidelity in Wi-Fi), and it allows mobile devices to connect via LED lights. It transmits data by modulating the light signals from an LED light bulb. The process is invisible to the human eye, and thousand of people are already using it in France, where the average Wi-Fi speed is about 10 megabits a second.

Light signals are received and converted into data by a dongle connected to the device, and the dongle has to be in the line of sight of the lamp.

French researcher Suat Topsu created the technology as part of a research team in 2005. He started the Vélizy, France-based company in 2012, and it now has 30 employees. Topsu is president, and Benjamin Azoulay, who worked on the launch of the Philips Hue, is the CEO.

The technology was previously used for business-to-business purposes, such as helping blind people navigate public transport systems, transmitting medical information in hospitals, and measuring travel times in supermarket aisles. The consumer version (designed by EliumStudio) is designed so you can point it in any direction, and the color temperature can be adjusted from cold white to warm orange to enable different kinds of lighting effects. The cable for the lamp connects to an Ethernet port in a router, and the dongle connects to a computer via a USB port.

“Just as clean energies are displacing fossil fuels and propelling us toward a world of responsible innovation, light is now replacing radio waves to provide a safe, people- and eco-friendly internet connection,” said Azoulay, in a statement. “MyLiFi marks the start of a new era in connectivity.”

The 800 lumens MyLiFi uses only 13.5 watts of energy, as compared to 20 watts for a Wi-Fi router. You can control it using a web or smartphone app, changing the light intensity or setting lighting atmosphere and log-off times. Oledcomm said gamers can use the connection for a fast and reliable “ping,” or faster interaction in online games. Oledcomm is also pitching it to the business market, where companies can use it in public settings.

Moreover, connections are much more secure than Wi-Fi as LiFi signals use visible light and cannot pass through walls, making it much harder to hack a company’s internet connection without attacking its firewall. And Oledcomm notes that MyLiFi offers an alternative to radio and electromagnetic waves, which may be harmful to humans. Upload speed is 10 megabits a second, and download speed is 23 megabits per second. The light weighs about 14 pounds.