Netatmo is a French company that specializes in smart objects, from security cameras to thermostats. Today, the company is launching the Netatmo Smart Home Bot to help you easily control all the things in your smart home.

The personal assistant is one of the ways companies hope to get everyone to buy more items for the internet of things, or everyday objects that are smart and connected. Netatmo is launching its bot at CES 2018, the big tech trade show in Las Vegas this week. Personal assistant usage has doubled from 2015 to 2017 to 710 million people, according to Tractica. 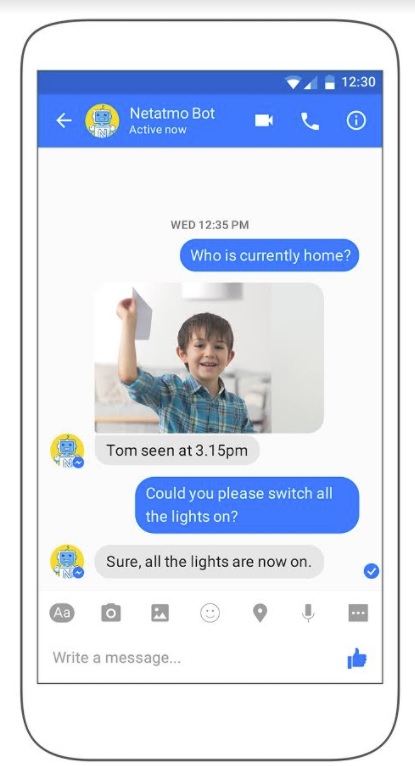 Above: You can text commands to your Netatmo bot.

You can control the bot through text messages on Facebook Messenger. The bot understands natural language commands from users, and it controls each Netatmo connected object in the home. Users can manage all their “with Netatmo” connected objects through the text commands.

Muller Group is announcing today that it is using “with Netatmo” technology to make its connected electric radiators.

With the bot, you can find out who is at home, what the weather is like, and remotely perform tasks like turning on the lights or changing the temperature. The bot learns from its exchanges with the user over time.

“The home can now communicate with its occupants and act accordingly,” said Fred Potter, CEO and founder of Netatmo, in a statement. “For example, the order ‘I am leaving’ will turn off the lights, close the shutters, and activate the highest level of surveillance for security cameras.”

Netatmo’s products are already compatible with other personal assistants, such as Siri, Amazon Alexa, and Google Home. The text commands give greater mobility and privacy, as people don’t necessarily want to use voice controls on public transportation or in the office.

Netatmo was founded by Potter in 2011. The bot has already debuted in English on Messenger as an app, and other languages will be introduced in 2018.