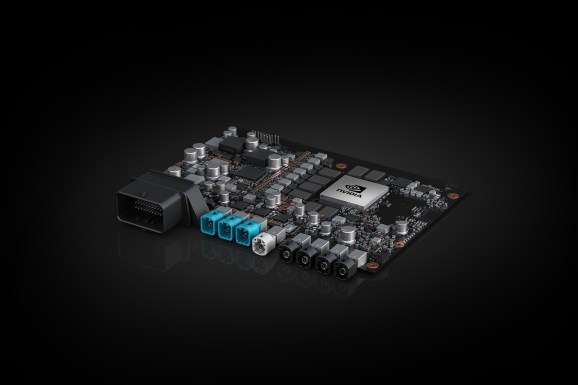 All of that adds up to a processor that’s supposed to be one of the best options for businesses trying to build self-driving cars. Computing power is a key issue for vehicles that are supposed to drive themselves around, since the cars need to run a variety of machine learning models in order to roam the roads.

The autonomous vehicle market has been a massive area of investment for Nvidia. GPUs are well-suited to performing the sorts of computations that are necessary to train machine learning algorithms, so the chipmaker has been at the forefront of the hardware race to build better and faster AI. This is the company’s latest move in a market that it entered at the Consumer Electronics Show in 2015.

Xavier has been a massive undertaking for Nvidia, which had 2,000 engineers working on a project that cost the company $2 billion in research and development. All of that work is supposed to provide massive efficiency and power gains. Nvidia said that Xavier will deliver 30 trillion operations per second consuming 30 watts of power, which is 15 times more efficient than the company’s previous architecture.

Nvidia CEO Jensen Huang told an audience at his company’s keynote address that building a chip for autonomous vehicles was a daunting challenge. He said that the Xavier is the largest SoC that has ever been made.

In addition to the new car processor, Nvidia announced a new set of software for creating automotive applications. The Drive IX software development kit will make it easier for companies to create virtual assistants that respond to events both inside and outside the car, while the Drive AR SDK will enable the creation of augmented reality interfaces for automobiles.

Those tools sit alongside Drive AV, a software development kit for creating autonomous vehicles powered by Nvidia’s hardware. Customers already building applications using Drive AV will be able to port that code over to Xavier chips without much extra work, according to the company.

The first samples of Xavier will roll out in the first quarter of this year. In addition, Nvidia expects to release a new Pegasus board, a set of hardware that combines two Xavier SoCs and a pair of Nvidia GPUs. The first sample units of those are supposed to start shipping in mid-2018.