Ambarella generates about $90 million a quarter in revenues from its video compression and image processing chips. Today, the company is launching two new chips that will bring advanced vision processing to next-generation cars, drones, and security cameras.

Santa Clara, California-based Ambarella is showing the CV1 and CV22 families of chips at CES 2018, the big tech trade show in Las Vegas this week. Ambarella has survived by doing things that other larger chip companies can’t do, such as high-end, extremely power-efficient image processing. As the commodity rivals catch up, Ambarella moves on to tougher problems. And that’s exactly what it’s doing with the shift to vision processing, a key component of artificial intelligence processing.

The Ambarella chips are based on the CVflow architecture, which is optimized for computer vision algorithms such as stereo processing and deep neural networks, said Les Kohn, chief technology officer at Ambarella, in an interview with VentureBeat.

In contrast to digital signal processors (DSPs) or graphics processing units (GPUs), the CVflow designs can scale up to much higher performance levels per core, or processing brain, Kohn said.

“It allows for much more efficient computation,” Kohn said. “Computer vision is the next big challenge for us. We realized a few years ago that image processing and video compression were reaching a point where there was not a huge amount of innovation left. Computer vision requires an almost unlimited amount of processing power and plays to our strength of delivering high performance at a low cost and high efficiency.”

The CV1 chip can do computer vision processing up to 4K resolution or 8-megapixel resolution, said Chris Day, vice president of marketing and business development at Ambarella, in an interview. That allows it to provide image recognition at much greater distances, and the architecture is programmable based on standard industry training tools such as TensorFlow. It can handle low-light processing and high-dynamic range processing, which means it can capture nuances of lighting and shadows in high-contrast scenes. 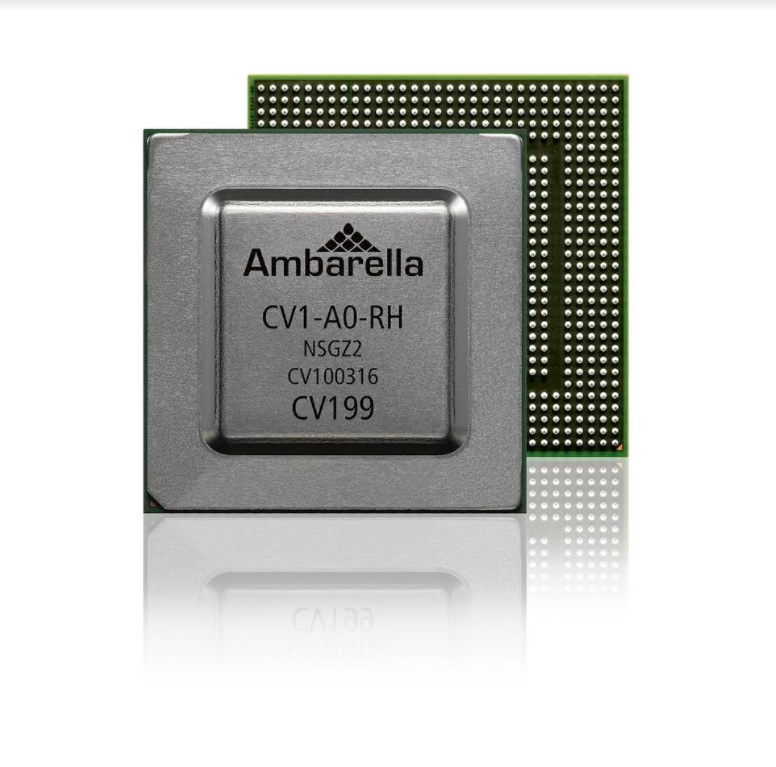 Ambarella will demo the chip running in a self-driving car that has multiple advanced cameras. Called EVA, the chip can power applications such as an electronic mirrors, pedestrian and traffic light detection, lane detection, terrain modeling, and surround view imaging. And it offers a longer perception range of 150 meters for stereo obstacle detection and 180 meters for monocular classification.

Another demo — dubbed “super drone” — features CV1 chips that power autonomous drones. Such drones can navigate on their own, know their location, and detect and avoid obstacles.

The CV22 is a full system-on-a-chip, which combines image signal processing with video encoding all on a single chip. The chip targets cameras for intelligent security, automotive, drone, and wearable applications. It doesn’t have the stereo vision processing, but it is a 10-nanometer chip that can fit into smaller devices such as security cameras or drones. It can do 4K 60-frames-per-second video encoding, Day said, and it has dual-core quad-core ARM processors, depending on the version.

The CV22 can be used in electronic mirrors, fisheye lenses, or dual-lens cameras. It can do 4K or 8-megapixel resolution at 30 frames per second. Kohn said visual processing solutions now cost hundreds of dollars, but Ambarella wants to deliver something much more cost-effective. Drones are especially hard because they require a balance of good processing and compact size, but the quality of drone performance has a wide range.

Rivals include Qualcomm, Nvidia, and Intel. Kohn said his company is focused on providing much more cost-effective and power-efficient designs than rivals have offered.