GE Appliances today revealed its Kitchen Hub, a 27-inch device that replaces the range hood above the oven and stove. When released later this year, in addition to more traditional tasks like ventilation, the Kitchen Hub will control other GE appliances, show your calendar, and provide access to smart home devices like security cameras.

Cameras facing outward can be used for video calls when cooking, while those facing down can be used to take pictures or video of stovetop activity.

Like other connected GE Appliances devices, the Kitchen Hub will be able to work with Amazon’s Alexa and Google Assistant.

Smart control of your kitchen, combined with video chats and getting video of that incredibly chicken curry you’ve been perfecting, makes the hub unique compared to other offerings, but this seems like tech that will only be accessible or useful if you’re tall enough to reach eye level with the top of your range hood. 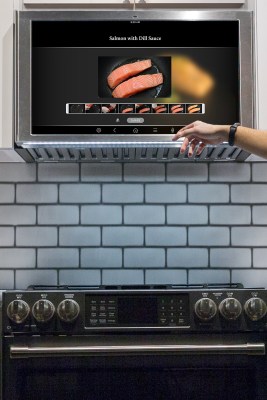 When it comes to market later this year, the Kitchen Hub will compete with a clutch of other products for the kitchen also trumpeted in the days ahead of the Consumer Electronics Show in Las Vegas.

Philips today announced plans to release a 24-inch Android panel with Google Assistant inside that could be a worthy competitor to Amazon’s Echo Show, a device touted for its ability to help people make meals.

Smart refrigerators serving up recipes include Samsung Family Hub, which will soon come with AI assistant Bixby, and LG’s InstaView refrigerator, which has a 29-inch display and responds to both Alexa and Google Assistant commands.