Mobile-focused voting company Voatz today announced a $2.2 million seed round to roll out blockchain-based voting in the U.S.

One of blockchain technology’s big promises is that it will be a democratizing force, and the blockchain community has long talked about making voting more secure, reliable, and unhackable. In fact, a number of countries and company boards are already testing out various blockchain-based voting solutions.

Voatz (pronounced “votes”) combines biometrics and blockchain tech to enable secure, auditable elections. The platform is currently in beta release. It runs on a public permissioned blockchain built on the HyperLedger framework and doesn’t use any form of cryptocurrency, so the company has no plans for an ICO.

While $2.2 million may sound like small change in an era when blockchain companies are pulling in significant sums of money in token presales and ICOs, Voatz considers itself an elections company first and foremost — one that uses blockchain to fix what’s broken with the electoral infrastructure. “So in that respect, it is somewhat different from a ‘typical’ blockchain startup,” Voatz cofounder and CEO Nimit Sawhney told VentureBeat.

A number of universities, labor unions, state political parties, church groups, and nonprofits are already using Voatz for voting, totaling some 70,000+ voters, the company said in a statement. While the platform is currently available by invitation only, it will have a broader rollout “in the coming weeks.”

In addition to bringing more transparency to the voting process, by letting people vote via their mobile devices “Voatz tackles two of the core challenges in voting — low participation in local elections and the need for better citizen engagement,” said Julie Lein, managing partner of the Urban Innovation Fund, which participated in the funding announced today. 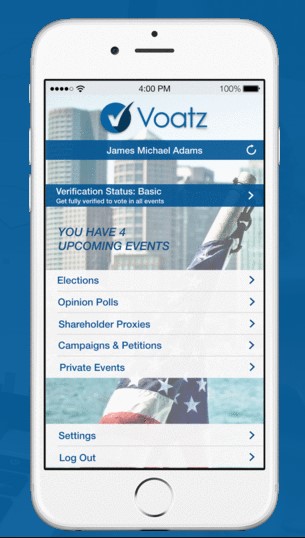 So what does the solution cost to roll out? “Depending on the type of election/voting involved, the starting costs are at least 50 percent cheaper on an annual basis than the costs of the current/traditional infrastructure,” said Sawhney. “Early movers can avail themselves of special discounts, such as one year free while signing up for a minimum three-year contract.”

Voatz is based in Boston and has an eight-person team. The startup is a graduate of the Techstars Boston 2017 and MassChallenge Boston 2017 programs.

Voatz will use the new funding to expand its business development team in the U.S. and internationally and to accelerate development of new product features “such as integrating with traditional/current electoral infrastructure [and adding] support for additional mobile devices,” Sawhney told VentureBeat. “The company also plans to formally enter the EAC [Election Assistance Commission] certification process later in 2018.” Once it has that certification, it will likely target larger deployments, he said.

The Voatz team previously raised nearly $600,000 in pre-seed funding. It also won $100,000+ in non-equity cash awards through startup competitions and hackathons, according to Sawhney.