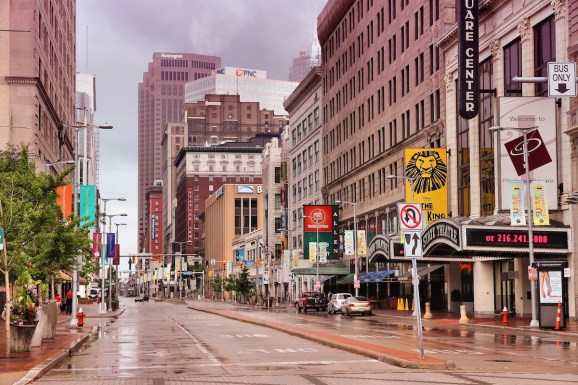 I’ve had a front-row seat to Cleveland’s startup community for the past 12.5 years — as an early employee, founder, executive, educator, and member of various startup-oriented organizations. Things sure have changed since 2005, when there were no accelerators and very few investors and startup support organizations. Generally, back then technology startups were viewed as more of a misunderstood curiosity than a legitimate economic driver.

In this post, I’m sharing my own personal, honest assessment of Cleveland’s startup community. My hope is that this will help those in other midwestern startup communities benefit by learning what’s worked here and what challenges still exist.

There is capital here, but it’s not easy

A common complaint from founders in Cleveland is that there’s just not enough capital here for them to fund their businesses. I’ve learned first-hand that this isn’t necessarily true. Sure, there is more capital available in places like Silicon Valley or other major tech hubs. But there are funding sources here. There are a few traditional venture capital firms like Zapis Capital, Mutual Capital Partners, and others. FlashStarts and the recently added Cleveland branch of Plug and Play offer capital, mentorship, and office space for pre-seed startups through their accelerator programs. North Coast Angel Fund has been a top-ranked angel investor network — and Drummond Road Capital was named one of the most active seed-stage investors in the country.

Beyond traditional forms of capital, the state of Ohio has funded programs like JumpStart, the Northeast Ohio Innovation Fund, and others that invest in early-stage technology startups. A recent initiative by Ohio Third Frontier aims to deploy over $100 million in capital by 2019 to early-stage technology companies based in Cleveland.

So capital is here, but founders’ complaints aren’t completely baseless. Oftentimes, it can be extremely difficult and cumbersome to access. In other locales, companies may be able to find $500,000 in seed funding from a handful of angel investors who are willing to cut quick checks after some reasonable due diligence. It’s usually not that easy in Cleveland. If you’re raising the same amount of capital from that angel fund or some of those state-funded organizations, you should expect to go through an arduous interview and application process followed by multiple rounds of pitches and subsequent due diligence from each organization one is raising funds from. It could take more than 6 months to receive funds from the first contact (if you’re fortunate enough to get beyond each stage).

Angel investors certainly exist in Cleveland, but many of them invest solely through the North Coast Angel Fund, which operates with a similar process as the other state-funded organizations to help angels vet startups properly. But for entrepreneurs, a single “no” from the Fund could mean 100 no’s from its members. Of course, many angel investors do still make their own investment decisions as well. But identifying these investors can be a challenge for entrepreneurs.

As a board member of the Ohio Venture Association, I heard firsthand investors lamenting about how there was a lack of dealflow and how they were working hard to find suitable companies to invest in. So especially at the seed stage, capital is available.

The community can often feel disjointed

Earlier in this post, I mentioned how back in 2005, there were very few organizations in Cleveland that were focused on supporting startups.

In 2018, though, there’s a new problem. So many of these organizations now exist that it’s nearly impossible to keep up with all of them. An event hosted by one accelerator might end up with the same topics and speakers as another event. In one group, founders complain about the lack of seed capital, and in another, investors lament about their lack of seed-stage dealflow.

As a result of this, the startup community can sometimes feel like it’s segmented into cliques, with each sticking mostly to their own groups but not always integrating well into the others.

Cleveland isn’t as founder-led as other places

There are plenty of founders in Cleveland, no doubt. But when outsiders want a voice of Cleveland’s startup community (typically press or leaders from other startup communities), they generally don’t first turn to founders. They turn to JumpStart.

JumpStart is a public-private partnership whose mission is to transform Northeast Ohio’s entrepreneurial community. And it’s certainly the most well-funded and well-staffed startup organization within the community. It’s received close to $100 million in funding from the state of Ohio, foundations, private companies and individuals, and it has deployed over $30 million of that in direct investments, as well as providing mentoring and other support services. Today, it operates several different funds to invest in startups and small businesses.

It’s likely that JumpStart acts as this de facto community leader for several reasons. It was originally formed by Cleveland’s community leaders and receives significant funding from local and state organizations. Those organizations are motivated to see JumpStart succeed. With that funding, JumpStart has the resources to put on many events and promote itself quite well.

My personal opinion is that JumpStart does a lot of good for the community. If it hadn’t invested directly in Cleveland startups or provided ancillary services for the startup community, it’s uncertain whether anyone would have filled that void. (Full disclosure: JumpStart was an investor in a company that I founded several years ago but no longer exists.)

Yet JumpStart isn’t a founder. It’s a support organization. It has its own goals and directives. Sure, if those goals and directives are fulfilled, the greater startup community will benefit. But the startup community likely has plenty of needs that don’t necessarily fit with JumpStart’s. So the organization can’t be relied upon to lead and represent all.

So while Cleveland’s startup community voice has traditionally not come from founders, that may be changing.

While people might not think of Cleveland as a leading tech hub, we have had several meaningful exits. Since 2014, notable acquisitions have included Oracle’s acquisition of TOA Technologies, Rakuten’s acquisition of OverDrive, and IBM’s acquisition of Explorys. In 2017, Ohio had one of its most successful exits to date when McKesson acquired CoverMyMeds for over $1 billion.

These acquisitions could have some positive effects on Cleveland’s startup community. The extra attention from the media and other outsiders could shine a light on the fact that companies can be started, grown, and brought to exit at scale in our city. The founders of those companies could turn into the next crop of angel investors and mentors.

It’s not yet clear whether Cleveland is seeing those potential benefits materialize quite yet. However, in order to continue to thrive as a community, we’ll need more of these success stories.

Cleveland isn’t the perfect startup community, but it has certainly come a long way in the past 12 years. And with its recent crop of successes and its founders starting to really step up and show leadership, there’s a lot to be hopeful about.

Mike Belsito is the cofounder of Product Collective and co-organizer of INDUSTRY: The Product Conference, an annual gathering of technology-oriented product people. Mike is also the co-host of two product-oriented podcasts — Rocketship.FM and Build Launch Scale — and is an adjunct professor of design and innovation at Case Western Reserve University in Cleveland, Ohio.