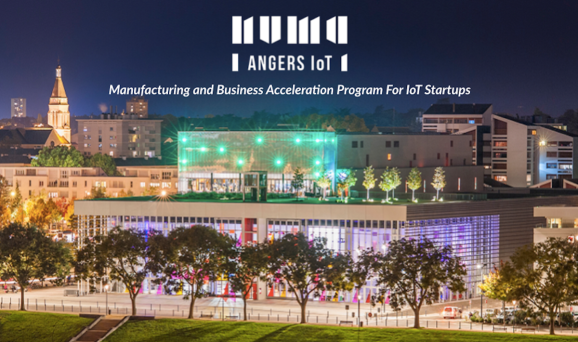 About 90 minutes southwest of Paris, the city of Angers has embarked on an ambitious program to become a model smart city. Almost three years after the program launched, those efforts are getting another boost thanks to a partnership with the country’s leading startup accelerator.

NUMA, which is headquartered in Paris, has announced that its newest accelerator will be based in Angers and will focus on internet of things (IoT) startups. The program is designed to attract advanced startups from across Europe to leverage this city’s growing ecosystem of IoT startups and its local electronics manufacturing base.

Dubbed NUMA Angers IoT, the new accelerator this week launched its first call for applications for a five-month program that starts in April. The goal is to help startups go from prototype to production through mentoring and partnerships with experienced manufacturers.

At the same time, the new accelerator is part of NUMA’s emerging strategy to ensure that the benefits of the country’s growing tech economy extend beyond the capital city. In the case of Angers, that means attracting and nurturing startups that can potentially help maintain and revive the region’s historic manufacturing economy, in addition to creating jobs in new fields.

“This is building the next step of the city’s innovation strategy,” said Romain Amblard, partnerships development director at NUMA. “Angers has a huge history of building things. We want to bring new startups to the territory and help them form industrial partnerships.”

NUMA was created in 2011 as France’s first accelerator. Since then, it has expanded globally to eight cities, including Moscow, Berlin, Barcelona, and New York. More recently, it has also turned its attention to regions outside of Paris, developing accelerator programs in Montpellier and Toulouse that match local economic strengths.

“Two years ago, most of the cities outside of Paris were in coworking and incubation mode,” Amblard said. “And a lot of it was based on public money. Now they are in startup and business stages. They know if they want to raise capital they need to go to Paris. But before that, they can be pretty successful with the right metrics in their local territories.”

As the government has pushed hard and invested heavily in developing the French Tech label and ecosystem, it has also emphasized the need to develop tech economies throughout a country heavily dominated by Paris. The hope is that robust startups will also bring innovation and jobs to traditional sectors like hospitality, agriculture, and manufacturing.

This vision includes Angers, a city with a population of around 150,000 that was anointed a French Tech city back in 2015. That recognition was the result of local efforts to cast Angers as the country’s model smart city. In addition to exploring a host of e-government projects, the city opened the City of Connected Objects in 2015 at a splashy ceremony attended by then-president François Hollande. The space serves as a kind of incubator to help people turn ideas into prototypes.

It has 10,000 square meters of floor space on a campus that also houses We Network, an organization of 700 electronics companies located in the western part of the country. More recently, the city has launched an experimental manufacturing project called WISE Factory.

The NUMA accelerator is designed to complement these efforts by helping entrepreneurs go from product idea to creating a company structure that can scale up, as well as planning for large-scale production by working with local manufacturing partners. Regional companies such as Eolane and Lacroix have been manufacturing electronics for decades.

The deadline to apply for the first class is February 21st. The new program will provide access to industrial machines and partnerships with experts in technical areas such as software, components, and logistics. In addition, there will be mentoring from other IoT entrepreneurs and investors and support for the production of a pre-series during the program.

The eight startups selected for the first class will also receive an investment of $95,000. The investors helping NUMA provide that funding include Eric Carreel, founder of Withings; Sculpteo; and Invoxia.

Even as NUMA continues to expand its international footprint in the coming year, Amblard made it clear the accelerator is looking for opportunities in other regions across France. As the technology evolves, Amblard believes IoT may play more to the strengths of other regions.

“We’ve discussed with a lot of VCs about IoT, and IoT outside of Paris,” he said. “VCs are very focused on things like deep tech and industrial innovation. And some of the most interesting companies doing these things are not in Paris, they are in the territories.”