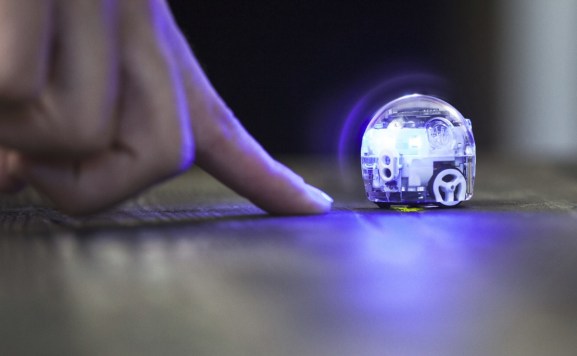 Ozobot's Evo is a programmable robot.

Ozobot designed its tiny Evo robots to get kids excited about robotics and programming. The company debuted in 2015, it launched its robots into more than 10,000 classrooms, and now the company is returning to CES 2018 with a way to reward players who share their creations.

The Redondo Beach, California-based company has created a leveling system that tracks users’ progress and rewards for Evo.

“We designed Evo to be the best robot on the market, one that revolutionizes learning through creativity and social connection,” said Ozobot CEO and founder Nader Hamda. “Evo bridges entertainment and education, and grows with a child as they advance from coding with colors to block programming. Evo is the updatable robot that is constantly evolving to deliver an ever-expanding experience that’s fun and challenging.”

Evo users share their creations every day, and the updated Evo app will reward that activity with a new leveling system for playing tricks with their Evos, such as choreographing music and lights. As people do these tasks, they learn more about programming concepts.

Ozobot also has 27 new unlockable avatars, such as robot dogs, zombies, unicorns, pandas, and pirates. In addition, the original nine avatars have all received a visual upgrade to match the new look and feel of the app.

The app’s OzoBlockly section now features six sample programs that have been coded to highlight what Evo can do, from Fashion Runway, which shows off Evo’s decorative skins (sold separately), to Color Mixer, which turns Evo’s sensors into a game.

Users can also remix Evo’s code and teach the bot new tricks by creating programs, which can then fill the rest of the app’s My Programs section. Users can run programs on Evo even when not connected to the app.