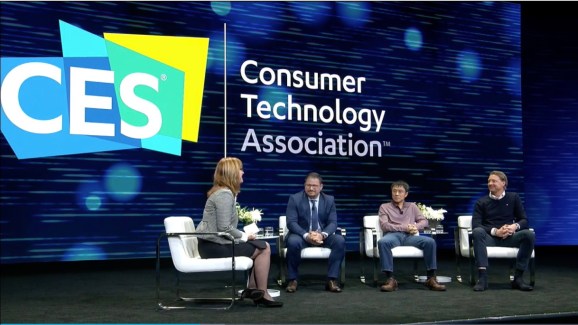 A classic riddle asks, “What’s everywhere and nowhere at the same time?” At CES 2018, the answer is 5G, the hugely important, just-approved standard for upcoming cellular devices. Days before the show began, companies told us 5G was important enough to touch all of their product announcements, and we expected to hear from all the major U.S. carriers, not to mention the world’s hardware manufacturers. But apart from some small-scale demos, there’s little in the way of 5G technology on the show floor.

The reason was explained during today’s CES panel discussion, Mobile innovation: How 5G will enable the future. Despite finalization of the 5G standard, a series of successful tests, and 2018 deployment plans from two of the four major U.S. carriers, the hardware is simply not ready yet. But it will be soon, so let’s go over what’s coming to the market.

Multiply the speed of your current data connection 10 to 100 times, cut responsiveness delays (latency) to “imperceptible,” improve security, and radically increase each network’s size — these are the promises of fifth-generation (5G) cellular technology.

Just how ubiquitous will 5G really be?

If you believe AT&T, Qualcomm, Samsung, T-Mobile, and Verizon, 5G wireless is going to impact virtually everything, including devices and industries that were only lightly touched by cellular service in the past. At the CES panel discussion, Qualcomm CDMA Technologies president Cristiano Amon said that with 5G, “everything is going to be wireless, not just mobile but basically everywhere,” including “mission critical services.” Verizon CTO Hans Vestberg opined that 5G “will transform industries and societies, which is the big point.” But how?

It’s easy to predict all of these things, but will they really happen? The panel suggested that adoption of 5G will likely be faster than it was for 4G, given how many people are now connected and demanding services.

Moreover, 5G has potential to change society in fundamental ways. During the CES panel, Qualcomm’s Amon mentioned the impact 4G smartphones have had on just the banking industry: Today, the average person does more banking in an app than at a physical branch. The speed, reach, and scale of 5G services will make people expect even more.

Baidu COO Qi Lu explained during the CES panel that the impact of 5G video will be huge, “replacing a lot of written language communications” over time. He also expects conversational AI, automated cars, and the public-private infrastructure designs of near-future cities to be radically altered by 5G.

What are Fixed 5G and Mobile 5G?

A key line currently separates Fixed 5G — 5G service to be used exclusively in a home, business, or school — from Mobile 5G, which would be available as you move between locations outdoors or on various forms of transportation. T-Mobile has claimed that AT&T and Verizon are focusing primarily on offering Fixed 5G, which will arguably be easier to implement, than Mobile 5G, which faces some unique technical hurdles.

AT&T appears to be disputing that claim and says it will begin a Mobile 5G rollout in 12 markets later in 2018. At the panel event, Verizon EVP Hans Vestberg appeared to confirm T-Mobile’s suspicion, however, noting that his company’s planned 3-5 market rollout in 2018 will focus on residential broadband and the use of pre-standard 5G hardware to develop confidence in 5G-enabling technologies and networks. But despite the small size of its initial rollout, “Verizon will be first, and that is what’s most important,” said Vestberg.

What are some key 5G technologies?

Bringing 5G to life requires both new technologies and major updates to established ones. Here are the ones you need to know about.

If you’ve ever heard reference to your phone’s “cellular radio,” that’s because cellular technology depends on transmitting and receiving radio waves. The further you get from a “cell” or “cell tower,” an antenna-laden box that transmits data to and from the internet, the more power your phone’s radio will use trying to communicate with the tower.

Just like when 4G or LTE replaced 3G, and when 3G replaced 2G or EDGE, carriers will need to install new 5G radio hardware on towers to support new devices that will be receiving and sending data across hitherto-unused radio frequencies. On the broadcasting side, Qualcomm is offering a “tunable” radio solution that can be adjusted to work across thousands of possible frequencies, wideband or narrowband, to accommodate the transition from 4G to 5G. The shift will also require new radio chips and antennas inside devices.

You might have heard of millimeter waves at airport screening areas, and — based on their use alongside backscatter X-ray scanners — might be concerned about the possibility of radiation exposure when they’re used to provide ubiquitous 5G wireless service. The good news is that these are separate technologies. Studies suggest that millimeter waves have no impact on organic matter; the same has been said for existing wireless radio waves.

Millimeter waves have been chosen for 5G because they’re particularly good at carrying large quantities of data (1-5Gb/second) over 1,000-2,000-foot distances using very little power, and because the millimeter wave spectrum is wide open across the world. But these waves aren’t great at penetrating buildings, generally requiring “line of sight” connections between their broadcasting and receiving points. They can be scattered by objects, and even rain, though Verizon’s Vestberg said that tests of millimeter wave transmissions across line-of-sight and half-line-of-sight scenarios “proved surprisingly better than we thought.” Still, 5G providers will need…

T-Mobile has been buying up low-frequency spectrum across the U.S., promising to use it for coast-to-coast 5G communications. But it acknowledges that 5G will likely require low-, mid-, and high-frequency radio spectrum. During the panel discussion, Qualcomm’s Amon said the same thing, suggesting that there will be “upper bands,” “sub-6” (6 GHz) bands, and “refarming of existing bands” to support 5G. “5G is not about a millimeter wave choice or a [low-frequency] choice,” said Amon, “It’s about all of it. It’s a Gigabit LTE foundation, overlaid with a more dense millimeter wave, units of Gigabit, tens of Gigabit, all these systems working as one.”

U.S. carriers are itching to plant their 5G flags across the U.S., but the hardware isn’t finished yet. As Qualcomm’s Amon noted, 40 companies came together to accelerate 5G standardization, and a “major Christmas gift was the 3GPP approval” of the first 5G standard. But despite the rush, final chips and devices are not yet ready. Amon said that he hoped one year from now to “be demonstrating a Snapdragon-powered 5G phone on a live network” at CES, which suggests Qualcomm isn’t expecting to ship mobile 5G products in 2018.

Today, companies can build prototype devices with prototype chips and antennas to test on prototype networks, but until the 5G standards are finished, chips and antennas can’t be finished. Until those are available in large quantities, actual products can’t be shown or released. That development-to-release cycle will easily take 1-2 years, depending on the product.

Testing of fixed and mobile 5G products has been underway for some time, and Baidu’s Lu suggests that work and testing conducted largely in the U.S. will spread to China and elsewhere in the world throughout 2018. U.S. carriers are largely talking about 2018 as a “road to 5G” year in which bridge technologies such as faster LTE Advanced data and Massive MIMO antenna arrays will be deployed before the arrival of 5G. Verizon’s Vestberg said that 2018 will be the year when the 5G ecosystem develops and tests products to get them working together.

Notably, South Korea, despite an aggressive early 4G deployment, hasn’t started a 5G rollout. And European announcements probably won’t be made until next month’s Mobile World Congress in Barcelona, at the earliest.

When is 5G actually coming, then?

Despite AT&T’s pre-CES announcement of 12 mobile 5G deployments later in 2018, and Verizon’s commitment to starting the first of its fixed 5G deployments before AT&T, the panelists seemed to agree that 5G won’t meaningfully roll out until 2019 or 2020.

Qualcomm’s Amon suggested that “flagship smartphones” could be on shelves by early 2019, allowing the first consumers to start transitioning to 5G. So it makes some sense that T-Mobile is promising its full 5G rollout in 2020, with initial deployments in 2019.

In other words, stay tuned for CES 2019, which should be 5G’s real opportunity to shine. This year is mostly just about laying the foundation.