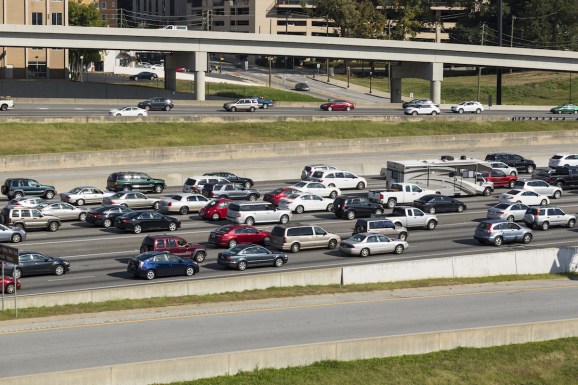 Atlanta’s traffic congestion infamy — the city regularly makes every annual top list due to its bottlenecks — is partially caused by car accidents at large, busy intersections. After a few accidents occur, the Georgia Department of Transportation (GDOT) may swoop in to assess the situation to make the intersection safer.

But what if they could do that before the accidents happen?

“Most crashes are preventable, which is the concept behind the ‘Vision Zero’ Initiative,” says Dr. Jidong Yang, assistant professor of civil engineering and director of Kennesaw State’s Georgia Pavement and Traffic Research Center. Vision Zero was originally created in Sweden in the 1990s in order to streamline mobility within cities while eliminating traffic fatalities and severe injuries.

“The purpose of this research study is to detect and analyze inconsequential traffic conflicts so that proactive actions can be taken to reduce or eliminate crashes,” says Dr. Yang.

Since 2015, Dr. Yang, along with Ying Wang, associate professor of mechatronics engineering; and Chih-Cheng Hung, professor of computer science, have been conducting a study to develop an image-based system for monitoring and studying the safety of large intersections using AI and a cloud-based real-time database.

The project uses real-time data, such as drivers braking suddenly, last-minute swerving, and other collision-prevention instincts, captured by cameras at the intersections to analyze the likelihood that collisions will happen.

Supported by a $180,000 grant from the GDOT, the two-year project is aiming to replace the current historical crash data method as conditions change rapidly with new population increases in the area. According to Dr. Yang, these intersections go unnoticed until a significant number of wrecks have occurred and the GDOT is being more proactive about prevention before this occurs.

“Deep learning algorithms (e.g., convolutional neural networks) will be used to ‘see’ road users like human eyes can through cameras.” says Dr. Yang. “Once road users are detected, they will be tracked and their trajectories will be extracted and analyzed to assess potential collision risk.”

The technology will allow the GDOT to use the crash data to realign roadways, adjust speed limits, add signage, and add additional turn lanes as needed.

“We have tested it in a simulated environment. We are still improving our algorithms to handle real traffic images,” says Dr. Yang. “We will work with the agency to test the technology at a selected intersection at a later date.”