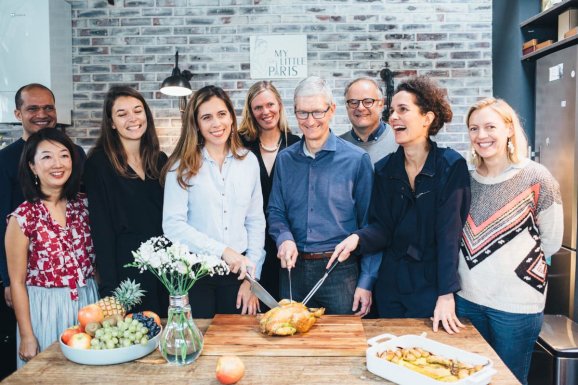 Apple CEO Tim Cook visits My Little Paris before his meeting with the French president.

A small surprise was nestled in the middle of Apple’s announcement of a $350 billion contribution to the U.S. economy today: Apple confirmed that it will repatriate the giant pile of cash it has held overseas. According to the release, Apple expects to pay approximately $38 billion in U.S. repatriation taxes, which means that it will be using a special corporate tax break to repatriate approximately $245 billion in profits created outside the country.

Prior to the passage of the reduced 15.5 percent tax rate, Apple faced a 35-40 percent cost to bring overseas profits back into the United States — a tax burden it was unwilling to bear. Including both federal and state taxes, Apple might have been expected to pay up to $100 billion in taxes on $250 billion of overseas profits.

Apple’s plans to bring the foreign cash back into the United States have been underway for some time. In September 2016, Apple CEO Tim Cook openly spoke of the company’s expectation that it would rapidly receive a tax cut from whomever the next president was, and that the company would likely repatriate the cash in 2017.

In April 2017, the White House floated a reduced repatriation rate of 10 percent, which Congress subsequently increased in its late December tax bill. Apple waited for the new rate, and nearly $60 billion in savings, to bring the cash back into the United States.

Despite hopes that Apple might immediately announce all of its plans for the massive windfall, potentially including a giant-sized acquisition, the company did not specify how it will use the repatriated cash. Instead, it focused on the $38 billion tax payment, noting that a “payment of that size would likely be the largest of its kind ever made,” and that the tax will be part of its $350 billion contribution to the U.S. economy over the next five years.

Update at 1:20 p.m Pacific: Bloomberg reports that Apple will give employees below “director” level a one-time bonus of $2,500 in restricted stock units, “following the introduction of the new U.S. tax law.” The grants will be issued to “most employees worldwide in the coming months.”