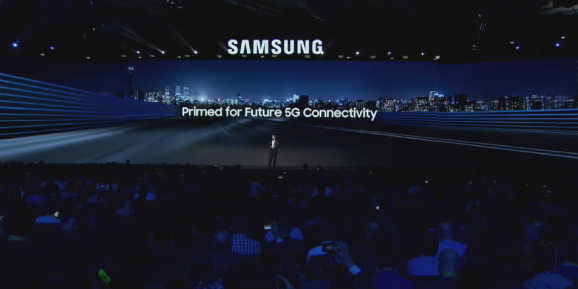 Samsung only briefly touched upon 5G at CES last week, but behind closed doors, the Korean company was reportedly showing off Exynos 5G, a prototype 5G-compliant modem designed for mobile devices. Described by BusinessKorea as part of Samsung’s plan “to significantly reduce its reliance on U.S. telecom modem chips for 5G smartphones,” Exynos 5G could enable next-generation Samsung phones to use an even higher percentage of Samsung-made components. The company expects to start using Exynos 5G in 2019 phones.

BusinessKorea reports that the Exynos 5G modem is forward-compatible, complying with the 3GPP’s draft standard for Release 15, the initial 5G specification set to be completed in June. Exynos 5G notably includes support for the 3GPP’s non-standalone (NSA) and standalone (SA) standards, with NSA meant to support connection to older LTE towers and SA for newer 5G networks built solely with 5G infrastructure.

The 5G modem radically increases radio frequency support, both in diversity of bands and the ability to use multiple bands at once. It supports radio bands ranging from below 6 GHz to ultra-high-frequency 39GHz, as well as past mid-frequency bands used in 2G, 3G, and 4G/LTE phones. To increase bandwidth, it can use carrier aggregation to bundle up to eight 100-MHz bands, reaching download speeds of up to 5Gbps — 10 times faster than common LTE and 5 times faster than peak LTE service.

Qualcomm and Intel unveiled their Snapdragon X50 and XMM8060 modems last year, predicting that phones using the chips will launch in the first half and middle of 2019, respectively. Samsung is reportedly targeting early 2019 for the first smartphones with the Exynos 5G modem inside, and will actively participate in Release 16 — the complete 5G standard — expected in late 2021 or 2022.