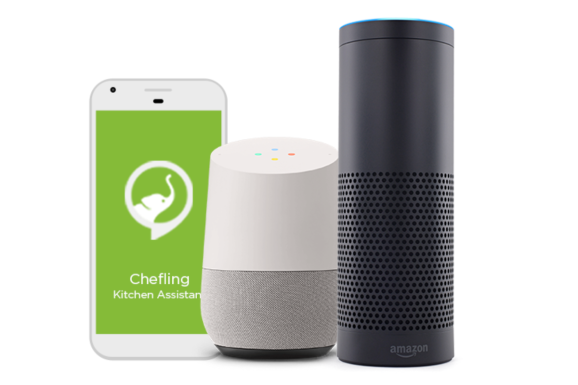 Cooking assistant Chefling today announced it has raised $1 million in a funding round for its app that records items you have in your refrigerator or pantry, then tells you recipes you can cook based on the food you already have.

The funding will be used to hire a chef, marketing team, and data scientists to improve the app’s ability to recognize pictures of groceries.

Chefling cofounder Amar Krishna attributes the app’s growth in downloads over its year of existence largely to popularity among people who own smart speakers. Chefling works in conjunction with Google Assistant and Amazon’s Alexa. A Cortana skill is also in the works.

When paired with an AI assistant, Chefling can deliver recipe ideas based on what’s in your kitchen, tell you when you’re missing an ingredient to make a particular recipe, and add missing ingredients to your shopping list.

Recipe recommendation based on ingredients in your kitchen gives Chefling users a feature trumpeted as a selling point in expensive smart refrigerators like LG’s InstaView Door-in-Door refrigerator showcased at CES earlier this month.

A chef will be hired to curate and improve upon tens of thousands of recipes Chefling draws from food bloggers. The app, which has been downloaded more than 100,000 times, can also work with recipe favorites users upload themselves.

In recent months, computer vision was incorporated into the app to give users the ability to scan store receipts and reduce the need to manually log items purchased from a grocery store. The app can recognize receipts from places like Walmart, Target, and Safeway. Part of the funding will go toward hiring engineers to broaden and enhance Chefling’s computer vision for receipt scans.

“So what we do is a user can take a picture of the receipt. We use the Google Vision API to get the data, and then we use NLP on our side to match it to our database so that it goes to the pantry [portion of the app],” Krishna said.

Steps will be taken in the future to create its own proprietary computer vision instead of calling on the Google Vision API.

Image recognition for groceries and specific products will be deployed within the next 6 months, Krishna said.

“What we’re trying to do is build the complete [kitchen] assistant,” he said.

The $ 1 million funding round was financed by Chicago-based XVVC LLC.

Chefling currently has 7 employees but intends to grow to more than 20 this year. The company is based in Sunnyvale, California.