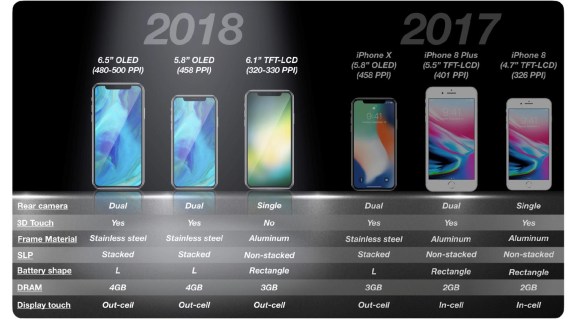 After releasing the iPhone 8, iPhone 8 Plus, and iPhone X in 2017, Apple will reconfigure its lineup with three new models, according to reliable KGI Securities analyst Ming-Chi Kuo. Instead of offering two midrange iPhones and one premium “X” model, Apple will move to one midrange iPhone with lower camera and screen specs, topped by two premium models differentiated by screen sizes.

For the midrange model, Kuo’s latest investor note (via 9to5Mac) describes an aluminum-framed iPhone with a 6.1-inch LCD screen, allegedly lacking 3D Touch capabilities. Likely to be known as the iPhone 9, this model is expected to have a traditional Retina display with roughly 330 PPI, plus a single rear camera. It would be an evolution of the 4.7-inch-screened iPhone 8 and start at the same price: $699.

On the premium side, Kuo anticipates that two stainless steel-framed iPhones will take the place of the current iPhone X, also known as the iPhone 10. Best understood as the iPhone 11 and iPhone 11 Plus, the new iPhones are expected to use 5.8-inch and 6.5-inch OLED screens with Super Retina resolutions of over 450 PPI. The smaller version would look nearly identical to the iPhone X, while the larger one will offer enough screen space for a split-screen mode. As further differentiators from the iPhone 9, each model would include dual rear cameras, 3D Touch, and 4GB of DRAM.

A prior research note established Kuo’s belief that all three models will include front-facing TrueDepth cameras and full-screen designs, including the iPhone X’s controversial “notch.” The depth-sensing camera will enable buyers of the $699 model to use features such as Face ID, Animoji, and Portrait Selfies, which are currently exclusive to the $999 iPhone X, while reducing the need for bezels and Touch ID authentication. Kuo expects that the lower-cost model will represent 50 percent of shipments due to its combined features and price point.

In light of widespread recent reports that the iPhone X could be discontinued by its first birthday, it’s worth noting that a better sequel was always in the cards; the only question is whether the X will coexist with its successor. Facing calls for bifurcation of the iPhone lineup into premium and budget versions back in 2013, Apple opted to discontinue the iPhone 5, using its innards for a cheaper iPhone 5C and its shell (with a new gold color) for a sequel. The same could, and likely will, happen again with the iPhone 9 and iPhone 11, potentially with the loss of 3D Touch as a cost-cutting gambit.