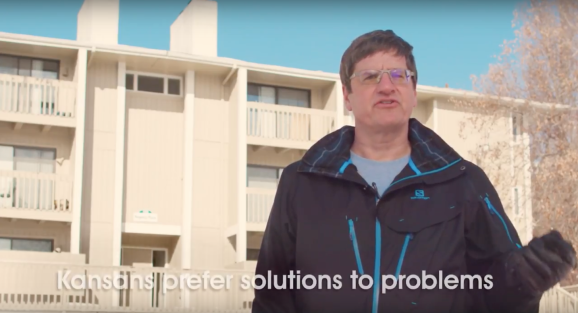 While much of Silicon Valley is keeping its eyes on a Mark Zuckerberg run for president, other tech luminaries are exploring ways to get more involved in politics. This week, former Google and Uber executive Brian McClendon was the latest to throw his hat into the political ring when he announced his intention to run for Kansas Secretary of State.

McClendon spent nearly 30 years in Silicon Valley, where he founded Keyhole, a visual mapping startup that Google acquired in 2004 and which became the basis for Google Earth. McClendon became Uber’s VP of Maps and Business in 2015 and left the company in March 2017, telling USA Today that he felt compelled to move back to his home state of Kansas after the 2016 presidential election.

The first rung on McClendon’s ladder to political office will be the Democratic Primary, which takes place on August 7.

In an interview with VentureBeat, McClendon outlined his vision for the office, should he win. He also criticized current Kansas Secretary of State, Kris Kobach. Under Kobach, voter files from the Interstate Voter Registration Crosscheck Program, a voter registration database used by 27 states to weed out voter fraud, have been exposed multiple times. McClendon claims that his background can help him design a more secure and accessible voter registration process in Kansas.

This interview has been edited for clarity and length.

VentureBeat: Why did you think you could have a bigger impact in the public sector versus the private sector?

Brian McClendon: Well, I think the challenge has been that there hasn’t been enough participation in the public sector, and there haven’t been tech-savvy problem solvers involved in government. I think that’s led to a situation where we’re not making good decisions about who should be in office.

VB: Since you’ve moved back to Kansas, have your contemporaries in Silicon Valley also expressed interest in doing something similar and either moving back or doing more work with their home state?

McClendon: I know of some instances of people … who are looking at how they can have a career while still living in the states that they grew up in. And they’re doing that at an earlier stage of their life than I am. It’s easier for me because I don’t have to have the same career that I did before.

VB: Do you think there’s still some concern about people who live in Silicon Valley who want to move back that they can’t have as fulfilling careers in tech in the Midwest versus in Silicon Valley?

McClendon: I think there are some very challenging and interesting careers in tech in the Midwest — the only advantage that Silicon Valley has is density. If you don’t like one company or one company fails, you can just hop to the next one. Whereas, in some places in the Midwest, you don’t have the density of job choices so you are tied to the fate of your technology company.

VB: What prompted you to run specifically for the position of Kansas Secretary of State?

McClendon: When I came back to Kansas and I talked to people about what was going on in the state, one of the things that people had seen problems with was voter registration. And the Secretary of State that Kansas had for seven years [Kris Kobach] has made voter registration harder for eligible citizens.

I helped build an app called KSVotes.org. It’s an online registration service that is much faster and easier to use than the one that the Secretary of State offers, and we were able to do this very quickly, with a small amount of effort.

Above: The homepage of KSVotes.org

I think there’s an opportunity to use my big data, software development, and experience building good user interfaces in Google Maps, and apply that kind of experience to government. The citizens are the customers of the government, and if [their website] isn’t easy to use, that’s a problem.

VB: Can you talk about the improvements you made to the voter registration form offered on KSvotes.org versus on the Secretary of State’s website?

McClendon: First we focused on mobile — I’ve certainly learned that the majority of [website] usage throughout the world and in the U.S is mobile first, and building KSVotes as a mobile-first app was step one. Being able to take an electronic signature on your phone turns out to be even easier than doing anything on a desktop, because signing a signature with your finger actually makes a small amount of sense.

We made it seamless where once you submit the form, it automatically emails the county clerk, which is something the Secretary of State site does not offer without additional steps. In many cases, many of the online systems will actually generate a form that you print and then you mail [or email] in with additional documentation.

VB: What other features would you want to add to help make the forms on the Kansas Secretary of State’s website more secure and accessible?

Crosscheck is a multi-state system that Kansas created — and Kansas pays for and does all the work for — that attempts to compare voter roles across states and look for duplication. And it’s in theory a good thing to do — but the execution in Kansas right now is not very good at all. It uses very inefficient technology that produces many, many false positives. There are alternative systems that already exist that are better — and I think we should either fix Crosscheck or replace it with some of these alternatives.

VB: What are some of the alternative systems?

McClendon: The good alternative is called ERIC — electronic records information center — and it’s a nonprofit. Twenty-three states use it, and it does a much better job of securing the data that states give it, and it does a far better job at matching the voter rolls to find duplicates. It does not create nearly as many false positives.

VB: On a macro level, what do you think are some of the solutions needed to help government create better software — is the answer to get more tech workers in government?

McClendon: I think part of this is a problem that you see in any kind of government — or even big company — specification, is if you write an RFP that has no understanding of how the product you’re asking for is going to be built, then you end up asking for things that are not reasonable. So if you work much more closely with how the products are really going to be built, you can get something much closer to an industry standard that doesn’t require custom development and therefore is going to be much cheaper, and also has more suppliers.

Yes, government has some unique needs, but they’re not that much different from a big company. Big companies have found ways to buy database systems and be able to have competing bids from multiple suppliers, and they know how to get the price down. And I don’t think government does a good job of that — and I think part of this is that the specification writing process allows for overspecification.

VB: So what changes do you think could be made to that process?

McClendon: Definitely getting the suppliers involved in it sooner, and also having a more educated RFP writing process. Make sure that when somebody asks for a feature they understand how much that’s going to cost — and is that capability really worth it or is that something from the state’s perspective, we could save money by doing it differently?