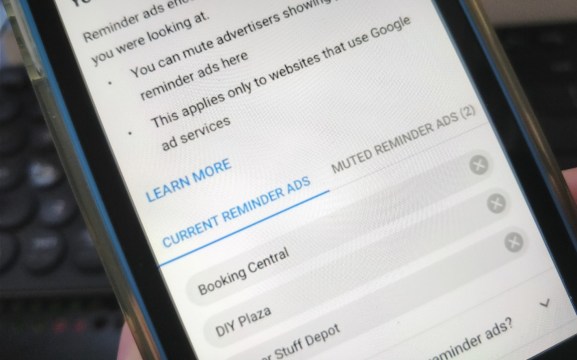 We’ve all been there: browsing an online store for a new lawnmower or a pair of shoes, and before you complete the transaction you decide to pull the ripcord and shop elsewhere. But the original ecommerce store really wants you to complete your purchase, so it starts serving you reminder ads to tempt you back.

While such ads may be effective some of the time, they’re often useless because you’ve already procured your new lawnmower down at the local mall. This is why Google is now allowing users to mute reminder ads in their Ads Settings.

For now, users will be able to mute ads in third-party apps and websites that use Google Ads, but the company said that it will expand this feature to let users mute reminder ads within Gmail, YouTube, and Google Search “in the coming months.”

To mute an ad, visit your Ads Settings dashboard, scroll down to the Your Reminder Ads section, and hit the little “X” next to a listed advertiser. This, obviously, will remove reminder ads from the company’s entire domain — it’s not item-specific.

It’s worth noting here that reminder ads will only be muted for “at least” 90 days, and it’s not entirely clear at which point the ads may become un-muted. And this only applies to non-Google websites and apps that use Google’s ad services.

Google has had a “mute this ad” feature since 2012, granting you a degree of control over what ads you see — if something irrelevant or distasteful pops up, for example, you can opt not to see it again. Muting “reminder ads” takes this a step further by allowing you to mute ads you may once have been interested in but for one reason or another no longer are — for the time being, at least.

Related to this, Google has also announced a couple of updates to its existing “mute this ad” feature. Feedback from any device on which you’re logged into your Google account will be applied across your other devices. So muting an ad on your PC will also now mute it on your mobile phone.

Additionally, Google said that it’s expanding the scope of “mute this ad” to “even more places” as it teams up with additional third-party apps and websites. So, according to Google, you will likely have more opportunities to mute ads across the online sphere in future.