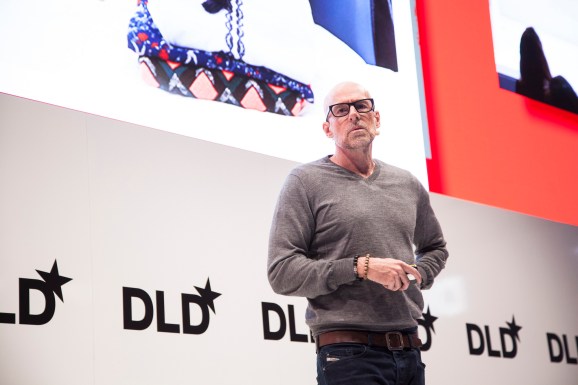 If you want to get an idea of how quickly sentiment has shifted against U.S. tech giants, just listen to NYU professor Scott Galloway.

The marketing professor is a self-professed fan of companies like Facebook, Apple, Google, and Amazon. He’s made a bundle owning their stocks, some of them are clients of his, and he even wrote a book last year called The Four: The Hidden DNA of Amazon, Apple, Facebook, and Google.

Over the past two years, Galloway’s annual talks at the DLD Conference in Munich analyzing their prowess and success have gone viral on YouTube. (See his 2015 and 2016 talks embedded below.) This week, however, Galloway returned to DLD to give a talk called “The breakup of big tech” that cast the four in a very different light.

“This started out as a love affair. I want to be clear,” he said. “I love these companies.” He then shifted gears: “After spending the majority of the last two years of my life really trying to understand them and the relationship of the ecosystem, I’ve become 100 percent convinced that it’s time to break these companies up.”

It’s an audacious claim from anyone, even more startling coming from someone who has been such a close and bullish observer of these tech giants. Yet for Galloway, it is clear that the four companies have simply become too big, and too powerful.

“The premise of my book is that Amazon, Apple, Facebook, and Google are our new gods, our new source of love, our consumptive gods,” he said. “And as a result of their ability to tap into these very basic instincts, they’ve aggregated more market cap than the majority of nation’s GDP … I think these entities are more powerful than any entity, with maybe the exception of China and the U.S.”

Galloway said he wasn’t making his argument based on many of the current emotional outcries against the companies, though these are important to note. And he proceeded to list what he considers to be these giants’ numerous sins.

“There are reasons to be angry at them,” he said. “They basically power fake news … So the notion that our platforms have been weaponized by the intelligence unit of a foreign adversary was initially responded to by Facebook as crazy, that we were crazy for thinking that. Then we found out it was millions of people, and now we’re finding out it was hundreds of millions of people who were exposed.”

He argued that given emerging research on the impact of social and digital media, no teens should be allowed on social media before they are 18 years old.

“Here’s a ranking of the most powerful people by Forbes,” he said. “This an insult to Americans. The most powerful person hands-down in the world is Mark Zuckerberg. He can turn off or on your mood. He can take any product up or down. He can pretty much kill any company in the tech space. We’re now finding that teens are more prone to depression because of their time on social media. If there was an ice cream company that was making teens more depressed or more susceptible to suicide, we wouldn’t be seating that person next to the president at meetings in Silicon Valley.”

These companies attempt to mask their problems behind empty rhetoric, such as by claiming they are simply neutral platforms, that they can’t do anything about such issues, or that sometimes innovation can be challenging.

“When you hear ‘innovation’ at events like this it means ‘elegant theft’,” he said. “That means we know we’re wrong, but we have no intention of doing anything about it.”

He added, “My other favorite: ‘We need to do better’.”

While such lack of accountability has clearly infuriated Galloway, he said much of the blame lies with users. By not electing politicians who would scrutinize and correct such behavior, citizens have given their tacit endorsement.

Even when companies are caught, mostly by European regulators, for violating antitrust rules or taxes or privacy laws, the fines, with numbers that sound big, are in fact miniscule, given the wealth accumulated by the four giants.

“We are telling these companies that the smart thing to do is lie and break the law,” he said. “They are doing their job, which is to make more profits. Who screwed up here? The man in the mirror.”

“The markets are failing,” he said. “The key to competitive markets is that no one company has too much power. And we have blown way by that.”

“The most egregious example of a society where we no longer worship at the altar of kindness and character but of innovation and money is the shitshow called HQ2 going on with Amazon, where basically governments have decided to turn over their civic responsibilities and taxation authority to the Seattle Giant,” he said.

He pointed to other stats around Amazon, such as its stock price, which seems to indicate investors believe it will attain monopoly pricing power, or its large market share in ecommerce, cloud computing, and smart speakers. Galloway said Amazon CEO Jeff Bezos likely knows his power is going to eventually provoke greater scrutiny, which is why he bought the Washington Post and has dramatically expanded Amazon’s lobbying team in D.C.

Meanwhile, Google now controls around 90 percent of search in some places and has been accused by European regulators of using that power to send traffic to its own services over other competitors. Facebook, by controlling most of the top apps, now “owns mobile.” “Your mobile phone is a delivery vehicle for Facebook,” he said, adding that this is allowing it to smother competitors like Snap.

He’s not surprised by the growing backlash against these companies, considering how they conflict with our notions of the role technology should play.

“So why are we so angry?” he said. “I think we’ve gotten spoiled with technology. We’ve come to believe that technology is about the betterment of man.”

Breaking them up, in Galloway’s view, would unleash greater competition, which would create more jobs, a broader tax base, and more innovation. He pointed to the U.S. Department of Justice’s case against Microsoft in the late 1990s, which — even with a mixed result — delivered a message to stop killing small companies.

“Otherwise, Google would never have been born,” he said.

He knows Silicon Valley and the tech giants will forcefully resist any efforts to resize these monoliths and will try to paint breakup advocates as liberals and weak, afraid of competition and innovation. He said that’s why it’s important to remember that the truth is just the opposite.

“The reasons we break them up is because we are capitalists,” he said. “These markets are no longer competitive. They can no longer resist abusing their market power.”

See the full list of videos from the DLD Conference here.