If you’ve been following tech news in 2017, chances are you’ve heard quite a bit about the ICO phenomenon. According to a December report by PwC, at least 438 ICOs took place in 2017, raising over $4.6 billion. And the majority of those were done by startups that did not have a product yet.

Is an ICO really a smart move for pre-product startups? 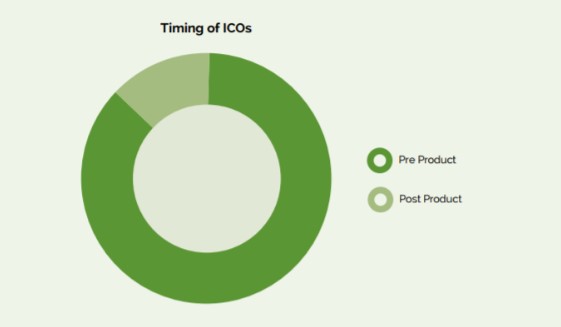 There’s no doubt an ICO offers a compelling value proposition for a pre-product founder: Raise a ton of money at an early stage without giving away control of your company and without dealing with annoying VCs. Sounds good right? Especially when you consider that about 30 percent of startup post-mortems mention running out of money as one reason for their failure.

But holding an ICO means inviting members of the general public to take part in the company. While building a community around a startup is a valuable thing — especially for blockchain-based apps (Dapps) — doing so too early can be incredibly harmful.

Once you create a community, you have to maintain it. This means you’ll need to post constant updates, hold Q&A sessions, and manage forums. If you have a designated “community team,” that work might be easy, but early-stage startups can’t usually afford those specialized teams. As one company explained, “Our staff worked literally around the clock answering the community.” Time spent engaging with the community is time not spent on the one thing that matters most for early-stage startups: finding product-market fit. You need to be tweaking the product’s value proposition until you hit gold.

It is incredibly rare for an early-stage startup to “get it right” the first time. In order to find product-market fit, a startup needs to walk the long painful road of failure and iteration. Pivoting from one MVP to the next can be disheartening enough as it is, but imagine constantly having to break the news to a whole community of investors, some of whom only participated in the ICO because they believed in the idea you’re now walking away from.

It’s easy to see how, under these terms, founders would stick with a losing product rather than admit failure and face the community’s wrath. The problem, in the words of Eric Ries, is that “if you cannot fail, you cannot learn.”

Some of these founders would argue that it is necessary for them to do an ICO, as their value proposition depends on having a token-based economy that is created by the ICO. For them, the ICO is about creating the tokens, the economy, and the community that inhabits that economy. Without these, it may be tough having an actual product to iterate on or finding product-market fit.

But even in this case, having the ICO pre-product is not necessary (or very useful). Token-based products existed and prospered way before ICOs became a thing — just think of the mobile gaming industry, which benefits from a bustling (and quite crazy) internal economy. The token economy in the gaming industry is completely centralized, which enables pivoting, tweaking, testing, and iterating on the product as much as needed.

Similar to the gaming example above, having a centralized or semi-centralized product is the right course of action for a startup that needs a token-based economy. Then, if founders want to hold an ICO to raise funds and enjoy the benefits of decentralization, all they need to do is redeem users’ centralized tokens for decentralized ones.

Colu, an Israeli startup (that we have no affiliation with), provides a good example of this approach. Colu’s product is a digital wallet (built on the Colored Coins protocol), that allows instant payments to local businesses using “community currencies,” thus encouraging community economics. Initially, Colu was the sole decision maker about which community could have their own currency. That careful implementation allowed Colu to learn and improve until it found product-market fit (over 50,000 transactions a month on Colu’s app). Only then did the company head for an ICO that will allow every community to issue its own currency without governance from Colu. This makes decentralization another layer in an already working, community-based product.

The bottom line is this: Don’t worry about funding, worry about having a great product. Holding an ICO before you have that product will just hurt your chances of finding it. And in that case, neither a decentralized protocol nor a pile of cash will help you.