Self-driving cars are going to be processing a lot of data from sensors aimed at detecting pedestrians and other hazards. And to make sure that data gets routed to the central processing unit (CPU) on time, Aquantia is bringing its high-speed ethernet networking into autonomous vehicles.

San Jose, California-based Aquantia has teamed up with Nvidia to provide its 10 Gbps ethernet connectivity for the Nvidia Drive Xavier and Drive Pegasus supercomputers for autonomous vehicles. The Nvidia platforms with Aquantia Multi-Gig networking will be available to car partners in the first quarter of 2018. Chips in autonomous vehicles is expected to be a $30 billion market by 2030, according to analyst firm Raymond James.

Aquanita, which went public last November, saw its stock price go up 1.73 percent today to $11.18 a share, valuing the company at $374 million. The company introduced three new chips to bring high-speed networking into cars. Those chips supporting networking speeds up to 10 gigabits per second. The new chips include the AQV107 Multi-Gig Phy, the AQVC107 PCIe Multi-Gig Mac+Phy Ethernet controller, and the AQVC100 PCIe Multi-Gig controller (MAC only). 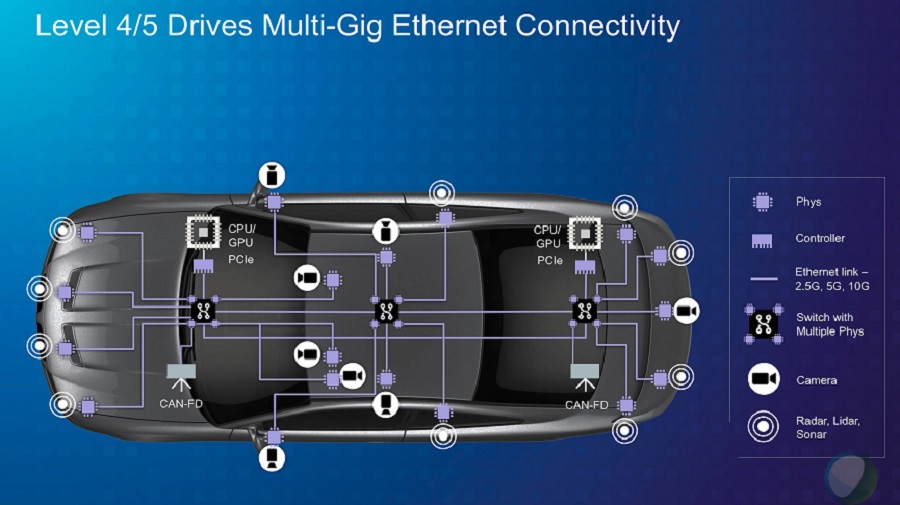 Above: Self-driving cars have to be heavily networked.

Phil Delansay, founder and senior vice president of business development at Aquantia, said in an interview with VentureBeat that the next-generation networking designs will provide better passenger safety and security as car makers prepare to launch Level 4 (where the human driver may take over a little bit) and Level 5 (where the car drives itself) self-driving cars.

“There is a degree of responsiveness and security those cars have to have, and you cannot do it with local processing on the sensor,” he said. “The best decision by the computer is made when a full set of raw data is provided to the brain, it takes all of that into account, and then it makes a decision.”

Nvidia’s Drive artificial intelligence car computers use deep learning to process data from multiple cameras, radar, lidar, and other sensors in a vehicle. The computers need to handle hundreds of trillions of deep learning operations per second. To make that processing seamless, the networking has to keep up, Delansay said.

Delansay said that production of the chips is in sample quantities now, and full production is expected to be in 2019.

“The cycles are long in automobiles, but we see a change with much more communication across the ecosystem to make things move faster,” Delansay said.

For 4K 60 frames per second video processing, the cars will need 10 Gbps networking, he said.

Aquantia has 240 employees, and it has 170 design wins for its chips. It has shipped millions of ethernet ports to its customers.