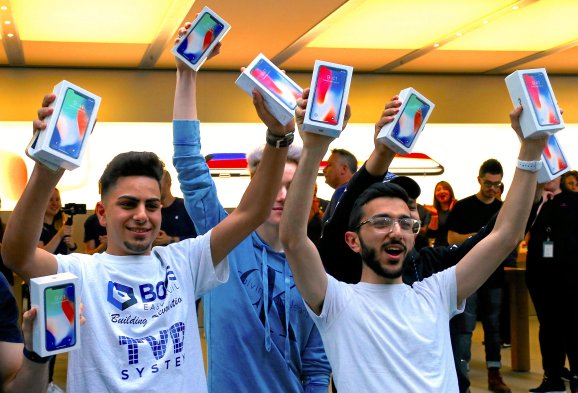 The first customers to buy the iPhone X react during global launch of the new Apple product in central Sydney.

Apple reported its first quarter 2018 financial results today, posting quarterly revenue of $88.3 billion on sales of 77.3 million iPhones, 13.17 million iPads, 5.1 million Macs, and $8.471 billion in services. As expected, the revenue once again represents a record for Apple, though sales of each of the company’s key products was either roughly flat or slightly down from last year’s holiday quarter, when it sold 78.3 million iPhones, 13.08 million iPads, and 5.37 million Macs.

“We’re thrilled to report the biggest quarter in Apple’s history,” said CEO Tim Cook, “with broad-based growth that included the highest revenue ever from a new iPhone lineup.” Cook also provided a little detail on sales of the iPhone X, which he said “surpassed our expectations and has been our top-selling iPhone every week since it shipped in November.”

As the performance of individual product lines wasn’t record-breaking, Apple focused on a positive milestone: overall device sales. “We’ve also achieved a significant milestone with our active installed base of devices reaching 1.3 billion in January,” said Cook. “That’s an increase of 30 percent in just two years, which is a testament to the popularity of our products and the loyalty and satisfaction of our customers.”

Apple CFO Luca Maestri also noted that the company’s “cash flow from operations was very strong at $28.3 billion, and we returned $14.5 billion to investors through our capital return program.” EPS was up 16 percent.

Apple’s board of directors declared a cash dividend of $0.63 per share of common stock, payable February 15 to shareholders of record as of the close of business February 12.