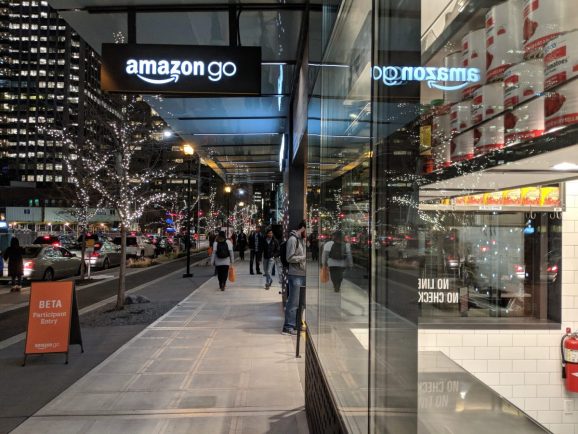 Amazon Go is a new kind of store with no checkout required. Customers can just walk out with no checkout or line. Sensors automatically detect purchases. Seattle, Washington, November 27, 2017.

The illusion of job safety for the 3.5 million cashiers in America was shattered last week when Amazon Go, the first cashierless grocery store in the United States, opened in Seattle. By most accounts, the store is highly functional: It is difficult to shoplift, and the technology — which Amazon described only as involving “sophisticated computer vision and machine learning software” — accurately identifies which items shoppers put in their bags. In contrast to previous efforts at automating grocery store checkout, like the perpetually frustrating self-checkout kiosks, this one looks like it just might be a success.

Though it’s unclear where this technology will lead, its very existence indicates an increasingly automated future for the grocery store industry. And this industry is only one of the dozens where reliance on machines has altered the way we think about human employment. From agriculture to banking, the automation effect shows no signs of slowing down.

Are you next? Here’s how automation is likely to affect three massive industries in the United States that collectively account for 19.5 percent of employment — roughly 30,000,000 American jobs.

On October 6, 2017, President Donald Trump named a National Day of Manufacturing. This act was one of many plans that he has put in motion to save the American manufacturing industry, from automobile production to a revival of coal products. And to look at employment, it may appear that the industry does need reviving: In 1980, over 19 million Americans worked in manufacturing; today, only 12 million Americans do.

In 2016, though, North American automotive companies spent over $282 million on robots. Because of this, manufacturing output achieved a record high in Q3 of 2017. Productivity is up, with manufacturers producing 47 percent more than they did 27 years ago. The advent of automation in manufacturing allowed the industry to produce more with fewer employees — an outcome that is desirable for both businesses and the economy, if not for employees.

This does not mean, however, that robots are coming for manufacturing jobs — at least, not any more than they already have. Figures from the Bureau of Labor Statistics indicate that employment in manufacturing is on the rise: After the sharp drop-off in manufacturing employment in 1998, there was an all-time low in 2010, and since then employment has been steadily increasing. Will it ever reach the same employment numbers as in the golden age from the 1950s to the late 1990s? No, but the increased productivity that comes from humans and robots working in tandem has allowed the industry to expand so that companies can hire both more workers and more robots. Today, Amazon has 15,000 robots working alongside its 50,000 human employees.

The Amazon Go store is the perfect example of how automation can streamline the user experience in retail settings. And while it’s the first of its kind in the grocery store ecosystem, this model of seamless self-service has been successfully executed in the restaurant industry already. Eatsa, for instance, was one of the first serverless restaurants to launch in 2015. Although the chain has had to close all but two locations since, its model was adopted by numerous other restaurants, particularly those housed in airports.

This model of fast food isn’t new, of course: Until 1991 people looking for food on the go would turn to automats, serverless restaurants that resembled vending machines. Much like self-service kiosks at grocery stores, though, the technology enabling this self-service was not sophisticated enough to make the experience truly seamless. As Amazon Go has demonstrated, once humanless experiences add tangible value to the user — rather than adding friction, as is so often the case with self-checkout — people start using it.

Because of this, we will see the increased stratification of fine dining and self-serve fast food. The human server will become a luxury, not a given, and human-human interactions will be offered as a sign of indulgence. Fast-food employees will be hit the hardest because they offer the least in terms of providing a dining experience.

From electronic milking to robotic greenhouse lettuce harvesting, the agriculture industry has been revolutionized by technology, much of it informed by sensors in IoT farming products.

Despite this massive usage of automation, however, employment in the sector has actually skyrocketed over the past ten years — going up over 200,000 jobs and expected to rise another few thousand by 2026. Pay for fieldworkers has risen over 50 percent since 1996 in California. And with ever-increasing production demands, it’s likely that the agriculture industry will continue to be a high source of employment, particularly in the area of developing, managing, and analyzing automation technologies. In fact, a 2015 report from the U.S. Department of Agriculture found that there was high demand for college graduates with degrees in agricultural programs. The report predicted that nearly 60,000 high-skilled agriculture jobs were expected to open annually in the U.S. over the course of five years.

Numerous reports have demonstrated that Americans do not want to work in the fields, however, and the trend toward increasingly automated picking and harvesting means that the jobs opening up will be skilled, rather than manual. For most Americans this is good news, but for many immigrants and lower-income rural Americans, this could mean a job shortage.

Where automation takes, it also gives

The conventional economic interpretation of the impact of automation is that it results in labor switching — that is, workers of a particular skill set moving from one industry or position to another. For instance, in the banking industry, ATMs replaced tellers, but overall employment in banks went up. Amazon has pushed this theory, arguing that stores like Amazon Go change the role of employees, not their very existence.

Not everyone is so optimistic, though. Futurists including Elon Musk and Bill Gates have proposed radical solutions to what they see as a potential uptick in productivity and downturn in employment. Their suggestions include implementing a universal basic income (UBI) and taxing robots. Ultimately, much of the future of labor will be decided through policy and whatever incentives businesses are given for choosing human labor over robotic labor.

Germain Chastel is the CEO and founder of NewtonX, the world’s first AI-powered knowledge marketplace.