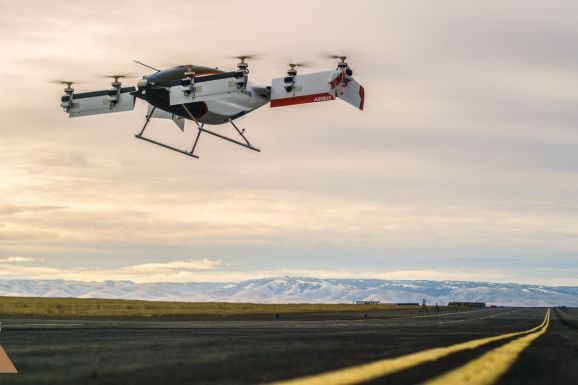 Vahana is an autonomous 'air taxi' Vahana being developed by Airbus.

Aerospace giant Airbus announced that it has successfully tested Vahana, an autonomous electric flying taxi being developed by its Silicon Valley-based A³ lab.

The company said the VTOL aircraft managed to fly to a height of 16 feet before landing. The initial test was conducted January 31 at the Pendleton UAS Range in Pendleton, Oregon.

While promising, the flight lasted a mere 53 seconds. The company said another test was successfully conducted the following day.

“Today we are celebrating a great accomplishment in aerospace innovation,” said project executive Zach Lovering, in  statement. “In just under two years, Vahana took a concept sketch on a napkin and built a full-scale, self-piloted aircraft that has successfully completed its first flight. Our team is grateful for the support we’ve received from A³ and the extended Airbus family, as well as our partners, including MTSI and the Pendleton UAS Range.”

Vahana is a single-passenger air taxi that draws on advances in electric motors, machine vision, and AI. The air taxi is one example of how companies like Airbus are hoping to reinvent urban mobility. But there’s no current timetable for introducing such technology to the public, as extensive testing, development and new regulations are still needed.