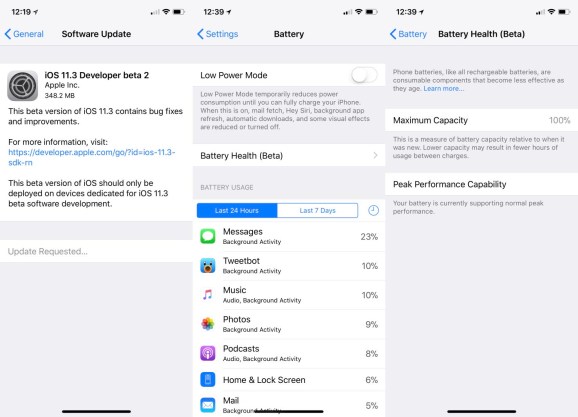 Even though it’s contained in a developer version of iOS, Battery Health is specifically labeled as a beta feature — a word typically used by Apple to reflect the possibility of incomplete and/or inaccurate performance. Its menu currently includes only two headings: Maximum Capacity and Peak Performance Capability. Measured on a scale beginning with 100%, Maximum Capacity tells you how much of the battery’s capacity remains compared with when the battery was new. Peak Performance Capability apparently provides guidance as to whether or not your battery is supporting normal peak performance; it likely becomes a toggle to disable performance throttling if the battery is exhibiting issues.

Interestingly, two newly-released documents have changed the battery performance story somewhat since Apple first addressed the throttling issue late last year. Apple’s updated iPhone Battery and Performance support document now says that the performance throttling function is “specific to iPhone and does not apply to any other Apple products,” versus the earlier possibility that other products might be impacted. It also differentiates between the latest iPhones and earlier models.

An Apple letter sent to Senator John Thune and published today suggested that the performance throttling features might not be necessary on the iPhone 8, iPhone 8 Plus, and iPhone X. In a letter answering questions previously posed by the senator, Apple said that “hardware updates… allow a more advanced performance management system that more precisely allows iOS to anticipate and avoid an unexpected shutdown.” The aforementioned support document notes that “the impacts of performance management may be less noticeable on iPhone 8, iPhone 8 Plus, and iPhone X,” even though all iPhone batteries age.

While a generous interpretation might view Apple’s hardware updates as standard in-line improvements to new devices, another view is that this is effectively an admission of a chip or hardware design defect affecting certain iPhones, the depth of which was initially obscured. Apple told Thune that it first became aware of the performance issues in fall 2016 and updated the iPhone software to address them in January 2017, but didn’t disclose the performance changes until February 2017. Due to the apparently wide scope of the issues and “strong demand” for batteries, Apple is considering rebates to users who paid full price for iPhone battery replacements prior to its recent battery discount program.