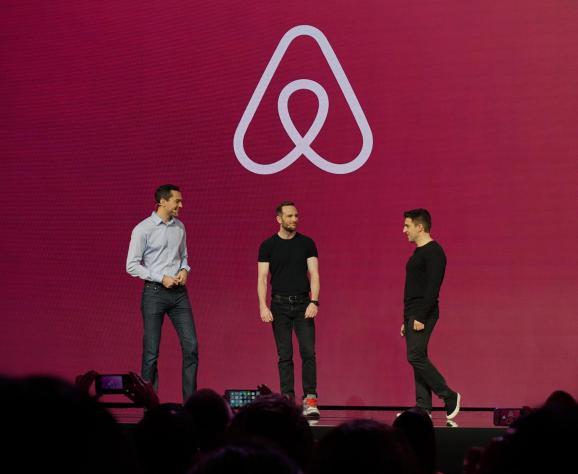 Airbnb cofounders appeared on stage at the company's host-centric conference on November 17, 2016.

A new report about executive turmoil at Airbnb includes a fascinating detail about how the company is generating its growing profits.

According to a story from Bloomberg, former CFO Laurence Tosi, who had previously worked Blackstone Group as CFO, took Airbnb’s cash flow and created an internal hedge fund.

According to Bloomberg, Tosi “quietly built a hedge fund within the company’s finance department. He used a portion of capital from the balance sheet to buy stocks, currencies, and fixed-income securities, mimicking the treasury fund he ran at Blackstone. The side project represented 30 percent of the company’s cash flow last year and made about $5 million a month for Airbnb, the people said.”

The revelation is part of a larger story about the events that led to Tosi’s recent departure from the company. According to Bloomberg, Tosi badly wanted to take Airbnb public in 2018 and had the support of several major VC investors. Cofounder Brian Chesky reportedly did not want to IPO this year, and his decision apparently led to a final rupture between the two.

After Bloomberg published its story, which is based in part on emails it reviewed, an Airbnb spokesperson denied that the company had ever considered going public this year.

But the financial details indicate that Airbnb is going strong: “An email to the board and other major shareholders last month helped instill further confidence in the business. Airbnb’s earnings before interest, taxes, and other expenses came to $93 million, more than double the company’s forecast of $36 million, according to the email reviewed by Bloomberg. Revenue beat expectations by about $120 million.”

Of course, if Bloomberg’s sources are correct, then as much as $60 million of that may have come from Tosi’s hedge fund. Investing a company’s cash isn’t unusual. And in fact, Apple runs Braeburn Capital, an asset management firm that has been dubbed by some as the “world’s largest hedge fund.”

But it’s unusual for a younger company to have enough cash to invest so aggressively, or to enjoy such nice returns that the fund essentially becomes a secondary business. And if and when Airbnb does go public, that extra cash flow would certainly make a comfortable cushion.