Apple’s new $349 smart speaker HomePod officially hit stores today, and you’re probably already aware that the initial reviews have been mixed: Generally positive on the sonic performance, neutral to positive on the industrial design, and disappointed to downright negative on Siri.

If you’re on the fence about HomePod and wondering whether to audition it at an Apple Store or your own home this weekend, here are a handful of helpful details that will put this new speaker in some perspective.

Apple CEO Tim Cook introduced HomePod last June at WWDC 2017, saving it for the traditionally important “one last thing” slot at the end of his speech. Before turning the stage over to Apple’s marketing chief Phil Schiller, Cook said that the company had decided to “reinvent home music,” a lofty goal indeed. (And a familiar one: Nearly 12 years ago, Apple said basically the same thing about the same-priced iPod Hi-Fi, which was discontinued the next year.)

Schiller explained that Sonos made good-sounding whole-home wireless speakers that weren’t “smart speakers,” while Amazon made “smart speakers you can talk to,” but didn’t sound great for music. “We want to combine all this in a product that can really deliver a breakthrough experience,” said Schiller, noting that HomePod would “rock the house” and be “really fun to use, with a built-in musicologist.” 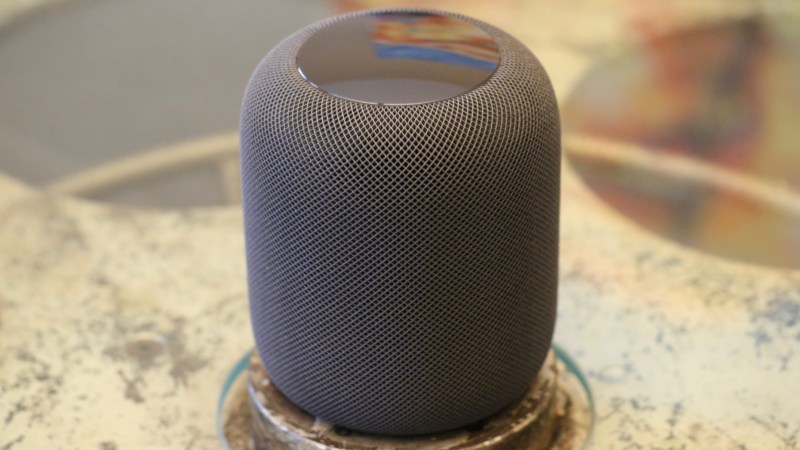 Measuring 6.8 inches high by 5.6 inches wide, HomePod was originally promised as a small but powerful speaker, monaural rather than stereo yet capable of omnidirectional sound — and stereo if used in a $698 pair. Buyers can choose between near-black Space Gray or off-white White versions, each with a glossy top panel containing + and – touch surfaces and a swirling globe of rainbow colors to indicate when Siri’s in use. There’s no remote control, and no audio input port — just a surprisingly heavy-feeling five-pound speaker with a non-detachable, fabric-covered power cable. 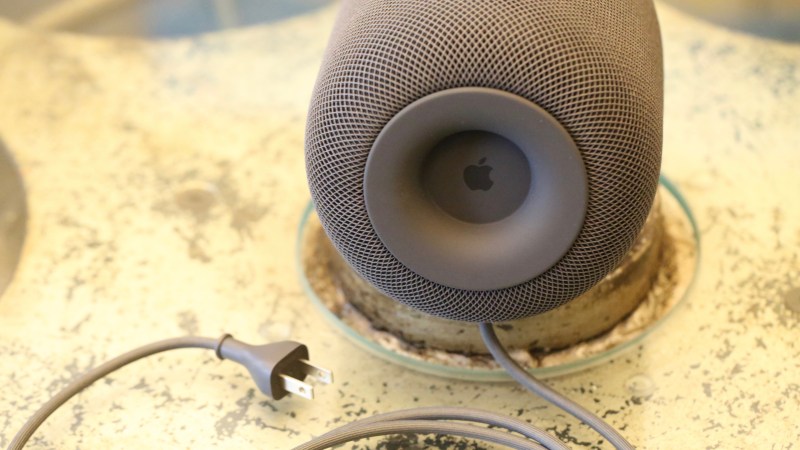 HomePod was delayed from its original December release date until today, which initial reports blamed on unspecified software issues, and later reports suggested were due to problems with multi-HomePod synchronization — specifically two units in one room, or more units across a house. Though the feature isn’t yet available, Apple has apparently backed off of calling two-HomePod synchronization “stereo,” and plans to separately release two-speaker and multi-room modes at unspecified future dates.

The first reviews of new Apple products always come from people who were selected by the company to receive special briefings and early review hardware. This time, Apple’s briefings included playing a selection of songs on HomePod and three competing speakers, asking Siri a series of questions it could answer, and in some cases demonstrating multi-HomePod features that were left out of the initial software release. 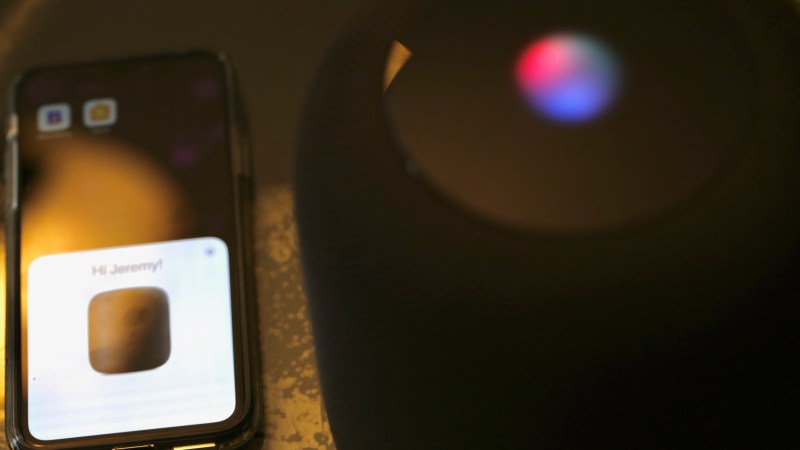 Above: HomePod’s top display isn’t really a screen, just a blurry swirl of lights that indicate Siri’s being used — you’ll need to use another iOS device to set it up.

Early reviewers have often disclaimed their own audio expertise, but have generally opined that the $349 HomePod sounds decidedly superior to the $80 Amazon Echo, similar to or a little better than the $199 Sonos One, and at least a little better than the $399 Google Home Max. However, they have generally said that HomePod’s reliance on half-baked software — including Siri — has major issues, most notably a lack of Siri functionality compared with other digital assistants, as well as weak integration with iOS devices, various iCloud-stored content, and third-party apps. On one positive software note, HomePod’s ease of setup has been universally praised. The overall experience has been called well-suited to some Apple Music users, but far less than ideal for those without Apple Music.

How does it compare with Alexa, Google Assistant, and Sonos One?

From a “smart speaker” perspective, HomePod’s strongest suit is its six-microphone array, which can hear you say “Hey Siri” at a distance at a reasonable volume, even when the speakers are loudly playing music. HomePod is also able to integrate with Apple’s Home app for iOS, letting you control HomeKit accessories such as light switches and garage door openers. It can’t yet control iOS devices or Apple TVs, and it can’t distinguish between multiple users’ voices.

Alexa works across Amazon devices and a rapidly growing number of non-Amazon devices. It lets you make calls, control smart home accessories, place orders at Amazon, and add third-party skills that can do thousands of different things ranging from games to ordering services. On the Echo Plus, Alexa also works as a smart home hub, and lets you set up accessories. 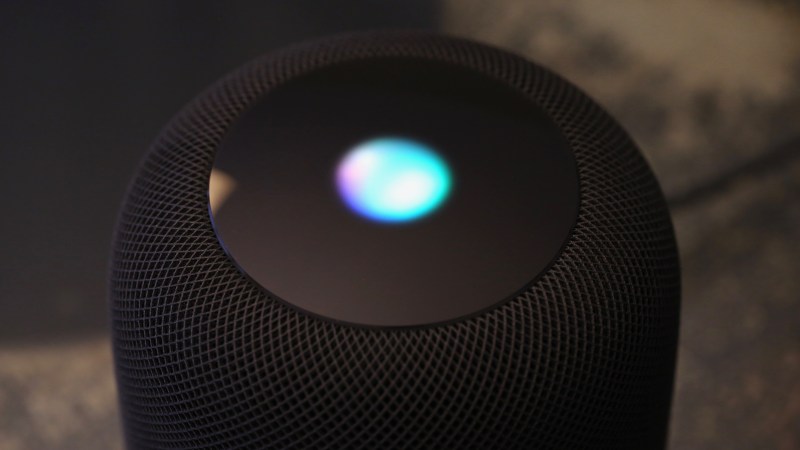 Above: Siri functionality is all that separates HomePod from being just another speaker, but it’s not particularly broad or deep.

Note that the $199 Sonos One is able to use Alexa now, is adding Google Assistant support via a software update in the near future, and will have support for streaming music via Apple’s upcoming AirPlay 2 as well. Sonos is currently offering a truly stereo pair of Sonos One speakers for $349 to directly challenge the HomePod at the same price point.

A number of features have yet to arrive before HomePod feels feature-complete. 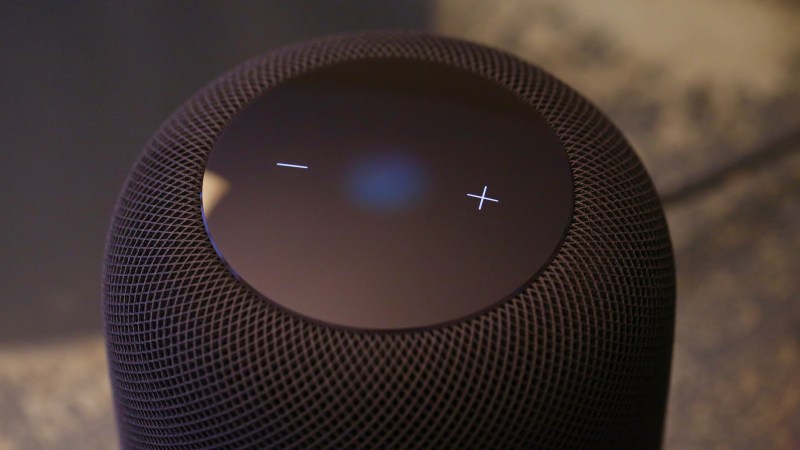 Above: Volume up and down buttons appear and disappear on HomePod’s top; you can tap between them to play, pause, and skip tracks.

HomePod is available in Apple Stores now across the U.S., U.K., and Australia, and can easily be returned if you’re dissatisfied after auditioning it at your home. We’ll have more to say on HomePod in the near future; read our past coverage here.