Two years ago, I was invited to judge an event called Pitch in the Plane. Basically, French entrepreneurs had to pitch their companies to a panel of judges as the plane flew from Paris to New York.

The event was organized by the French Touch Conference and its partner, OpenSkies, which provided the plane. The conference was the brainchild of Gaël Duval, a notable name in the French Tech ecosystem. But for all the obstacles Duval and other French entrepreneurs have overcome to build a surging startup ecosystem here, having to do battle with brioche may be among the least expected problems they have faced.

But alas, French Tech is now finding itself under legal attack for its anglicized use of the word “pitch.” One of France’s largest producers of dessert foods, the Brioche Pasquier Group, is enforcing its trademark for one of its most well-known products: Pitch.

How to describe Pitch? Here’s how Pasquier describes it: “Pitch was the idea of one of the Pasquier sons in 1986. His children would take our Pains au Lait as a snack when they were out playing sports. To make it more exciting, they would put a chocolate bar inside. This gave their father the idea to add a delicious chocolate filling to the brioche.” 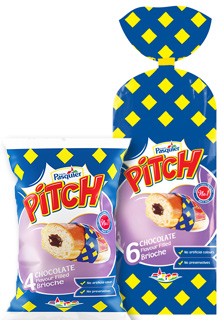 So imagine you had a hot dog bun or, say, a slice of Wonder Bread that was slightly sweet, and you took a piece of a Hershey’s chocolate bar and wrapped it inside and ate it. That’s a Pitch brioche.

Now you might assume that because this is France, and France is arguably the world’s dessert capital (with apologies to Italy and Austria), what might sound crass in the hands of uncouth Americans has been transformed into a wonder of culinary pleasure. And you would be wrong. Because Pitch really does just taste like sweetened white bread wrapped around chocolate. By comparison, MoonPies and Ding Dongs taste like something from a Michelin 3-star restaurant.

In any case, French entrepreneurs aren’t shy about adopting English words commonly used by Silicon Valley startups, Indeed, I hear some French friends even inventing French conjugations for “pitch.” The French gave us voila and coup d’état. We gave them pitch.

Five years ago, the national guardians of the French language, the Académie française, tried to halt this growing menace from the English language by pointing out that there was no need for the French to say “pitch” because there were plenty of other real French words that could be used instead. If you were “pitching” something like a film script, instead of calling it a “pitch,” simply say: “idée, résumé, argument, canevas.” Or if you’re communicating an idea, why not say: “présentation, argumentaire, démonstration?”

“Why deprive yourself, at the risk of diminishing the wealth and precision of our vocabulary?” the Académie wondered.

Alas, being entrepreneurs, tech founders did not heed this advice and continued to use the word “pitch.” Indeed, it has become so pervasive that last year the French newspaper Le Figaro took the time to explain the origin of this bizarre word to its poor readers, whose ears were no doubt hurt by this Anglicism. And the paper sympathized with readers who could be forgiven for thinking of a certain dessert every time they heard the word.

“As its tonic accent indicates — to say pitccchhhh — this word was not born in our beautiful French lands, but across the Channel,” Le Figaro wrote, pointing the finger at the British for being, well, British. Most annoyingly, the English word had so many meanings: a “tone,” “a terrain,” “a slope” … “to promote,” “to throw,” “to pose,” “to fall,” “to bounce.”

What a mess, that English language.

But then, Le Figaro notes, there is the “elevator pitch”:

As the authors of the Little Illustrated Dictionary of Innovation and Entrepreneurship tell us, the pitch was born to illustrate the theory of the ‘elevator pitch’. According to the story, it is considered that ‘the duration of a good summary should not exceed that which is spent in an elevator.’ Be careful! As there are floors for elevators, there are time levels for pitch. One should not exceed 1 minute if one wants to succeed with an ‘elevator pitch’ and thus be as convincing as possible in a minimum of time; 3 minutes for a standard pitch, that is to say the time required to present a project in conference, and 10 minutes for the pitch of the investors.

In other words, it’s hard for the average Francophone in Startupland. But if the use of the word “pitch” is merely confusing or annoying for some, it’s a competitive threat in the eyes of Pasquier.

According to Le Figaro, Pasquier has sent cease and desist letters to at least six French startups, demanding that they stop using the word “pitch.” “This pressure is grotesque,” Duval, who received one of the letters, told Le Figaro. “Training for startups doesn’t really overlap a brioche.”

The organizer of the Pitch Parties meetup in Paris announced he was ending the events under pressure from Pasquier. Organizers of the The School of Pitch have decided to fight for now.

Pasquier and its lawyers didn’t respond to a request for comment from Le Figaro.

But it seems French entrepreneurs may need to find a new word to describe the action of rapidly explaining their startup.

Anglophones entrepreneurs, can we help them out by suggesting some possible non-trademarked English words? Tweet them to me: @obrien. I will send the winner their very own authentic bag of Pitch.

UPDATED: Pasquier issues a statement on what has now been dubbed #Pitchgate :

Translation: “We are not banning use of the word ‘pitch’ in everyday speech, but protecting the rights of our brand ‘Pitch’ when other companies register it at the INPI for commercial purposes. We have entrepreneurship in our veins, we support it, and we will continue to support it while respecting everyone’s rights.”

INPI is the “Institut national de la propriété industrielle,” the French agency where trademarks are registered. In this case, Pasquier is saying they specifically have an issue with anyone else who is trying to trademark some types of names that include the word “pitch.” A search of the INPI shows that there are quite a few.