How bad is the diversity in tech problem? Seriously bad. And seriously long-standing.

For almost 30 years, women have made up less than 10 percent of the entrepreneurial and venture capital market labor forces, while Hispanics hovered at 2 percent and African Americans below 1 percent, according to a recent Harvard Business School paper.

What’s more, even with an increase in startup inclusion programs from 25 percent to 41 percent in 2017, representation has not budged.

In the Midwest, the same trends hold true — albeit with slightly better representation numbers for female founders getting funded. Yet a combination of community organizations, accelerators, and incubators are working to fix the problem.

Across our research at Hyde Park Angels, we found at least 34 organizations in Illinois that support diversity in tech, 5 in Ohio, 4 in Minnesota and Michigan respectively, 3 in Indiana, and 1 in Wisconsin. The majority focused specifically on advocacy and support for women in tech.

After talking with over a dozen women-focused organizations, along with individuals who benefited from their programs, we found a few common themes around why the problem is systemic and how to fix it, including creating communities, providing flexibility and education, and facilitating network-building.

“When we look at women and diversity, we want to make sure that everyone has a voice and everyone feels welcomed,” said Alicia Driskill, founder and CEO of EvolveHer.

According to Driskill, women face significant challenges in technology related to the wage gap, dwindling careers prospects after maternity leave, and lack of leadership opportunities. But to confront these problems, as well as grow their businesses, they need a safe space to talk about them.

She built the Chicago-based EvolveHer as a creative workspace for women with the goal of supporting “a diverse group of women by allowing them to have conversations that will help them on a personal and professional level.” 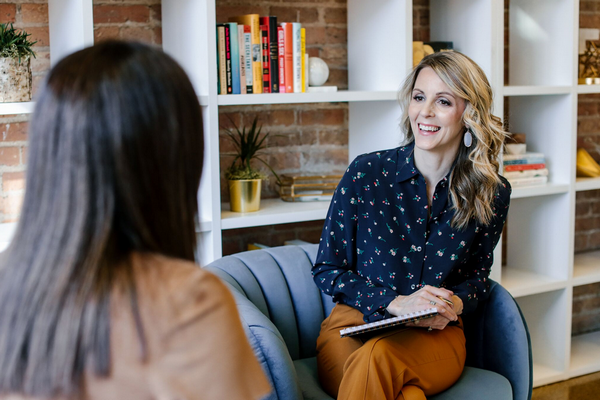 Above: Alicia Driskill of EvolveHer

This need for a community that strengthens women’s positions by giving them the connections and resources they need to get a leg up is a theme across Midwest women-in-tech organizations.

In Indiana, WomenIN empowers aspiring women in technology and seeks to support the growth of female entrepreneurs. The initiative is run through Purdue Foundry, but expands its offerings outside of the university ecosystem.

This holds true whether female entrepreneurs are in the same space together. In an environment that traditionally has not accepted women, WomenIN focuses on bringing education and support to founders on-demand and in real time through online platforms.

In Michigan, Inforum focuses on accelerating women’s careers by giving them a place to learn, network, and find speaking opportunities themselves. As part of their program, Inforum provides structured education to help grow a greater pool of angel investors and entrepreneurs.

Inforum president and CEO Terry Barclay said that since the program launched in 2012, 100 female entrepreneurs have participated, incorporating 41 new companies, creating 384 new jobs, and receiving 35 new patents. These women have raised more than $41.8 million in new capital and over $9.1 million in government contracts.

“At the current pace of addressing the gender wage gap of 20 cents on the dollar, that gap will close nationally in the year 2059. And in Michigan, where we have an older economy, it will take even longer — till 2084. We can’t let that unfold naturally. We need Inforum because even though women enter the workforce at roughly the same rate as men, we represent just 21 percent of the senior leadership roles,” said Barclay.

But are these programs and initiatives really increasing diversity in tech?

For Julie Novack, CEO and cofounder of PartySlate, the answer is mostly yes. She was part of the first cohort of WiSTEM, a Chicago-based program that connects female entrepreneurs to capital sources, tech resources, and a broader community. Since participating, PartySlate has raised $3 million in funding. (Disclosure: PartySlate is a Hyde Park Angels portfolio company.)

Novack identified the program as useful in the early days of her company because of the outside speakers the organizers brought to educate cohort participants, as well as having a community of female founders to lean on.

“I’m much closer with the female founders I’ve met. You have more in common. You go to these gatherings and it’s 80 percent men. You’re just drawn to each other. I’ve found some of these founders that have kids and families who understand the challenges of balancing everything,” Novack said.

Still, she sees one major gap when it comes to these diversity programs.

“There are not enough female venture capitalists. I am seeing more and more female entrepreneurs. We need to see more women who are investing. I would like to see more venture programs to get women into venture. Giving women the resources to start the business [is important], but they won’t get more funding without more equal representation in venture,” said Novack.

For her part, Novack has built an organization that she says is very diverse, and she’s helped another female founder get funding by making a connection to PartySlate’s existing investors.

Perhaps once we start empowering women in tech with the capital they need to build and invest in companies, inclusion programs will finally start taking hold.